It Came from Something Awful: How a Toxic Troll Army Accidentally Memed Donald Trump into Office 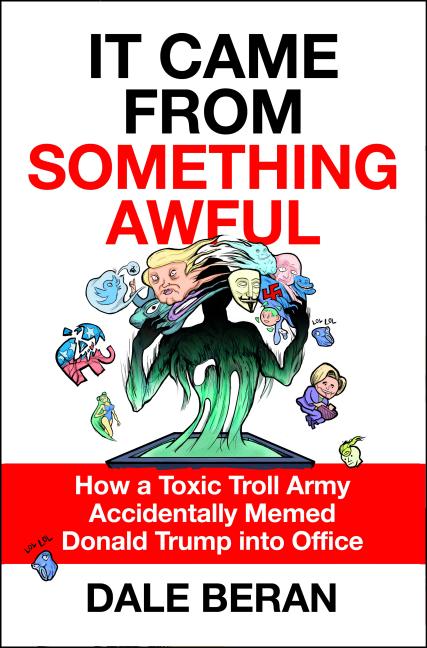 In It Came from Something Awful, Beran uses his insider’s knowledge and natural storytelling ability to chronicle 4chan's strange journey from creating rage-comics to inciting riots to―according to some―memeing Donald Trump into the White House.

What The Reviewers Say
Positive Emma Grey Ellis,
Wired
Any page of It Came From Something Awful would be the most shocking page of most books ... Reading Dale Beran’s chronicle of 4chan...feels like scrolling through the forum itself. Each page turn sucks you ever deeper into chan culture ... Naturally, Beran explores the psychology of young, disenfranchised masculinity that 4chan represents and the sociopolitical context that molded its minds, which is the book’s greatest strength ... while I think Beran gives 4chan a bit too much credit as world-shapers, I likely gave the site too little. When you’ve finished It Came From Something Awful, it’s hard to hold it all in your head.
Read Full Review >>
Positive Andrew Limbong,
NPR
Beran's a writer and cartoonist who got a lot of attention for a 2017 piece he published on Medium titled 4chan: The Skeleton Key to the Rise of Trump. The majority of his new book is an expansion of that ... There's less of a focus on [Beran] in the book. Instead he opts for an empathetic distance, like a guy explaining how his crew from high school lost touch over the years ... It's a disappointing omission. It might've helped illuminate his underlying point: Economic inequality has made us all feel impotent and searching for an identity, so we glom onto a reality imposed on us via screens ... But avoiding that personal touch helps him avoid the trap of making false equivalences between chosen identities ... Beran makes a convincing argument that we're all caught up in simulations of political change rather than actually affecting it ... If Beran's to be believed, all the world's an Internet forum. The mods aren't asleep, they're just out at the movies, leaving the goons free to do their work.
Read Full Review >>
Positive Kirkus
A complex, speculative murder board that probes the ascendance of American fascism ... the author’s coverage of neo-fascist movements is chilling, though peppered with clever cartoons that explain certain aspects. It’s a blow-by-blow study of the devolution of American culture, especially during the past few years ... A deeply disturbing, mostly well-crafted history of how we the people, more divided than ever, got here.
Read Full Review >>
See All Reviews >>
What did you think of It Came from Something Awful: How a Toxic Troll Army Accidentally Memed Donald Trump into Office?
© LitHub | Privacy