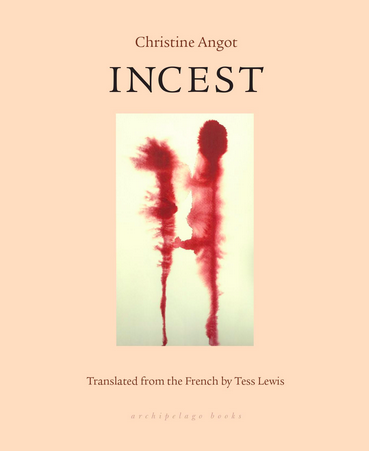 A daring autofictional novel that made Christine Angot one of the most controversial figures in contemporary France literature recounts the narrator's incestuous relationship with her father.

What The Reviewers Say
Rave Alice Martin,
Shelf Awareness
Written in emotional, stream-of-consciousness prose, Incest can often feel agitated and erratic, perfectly capturing the shattered inner world of its narrator, who is suggested throughout to be the author herself. As she blurs the lines between reality and fiction, Angot insists upon unsettling her reader, in terms of her meta approach, her taboo material and her polemic style. Together, these elements deliver a devastating exploration into the self-loathing and the disturbing paradoxes of human desire. While her work may trouble readers with its brutal physicality and trembling honesty, the power of these reactions speak most directly to its successes. In refusing to shy away from controversial content, Incest challenges, disgusts and confounds, making it a moving and memorable contribution to contemporary literature.
Read Full Review >>
Positive Giorgos Kassiteridis,
Asymptote
The intertextuality and the slippery subjectivity of the narrator could have been demanding, as well as the peculiar structures and punctuation, which even the author acknowledges. The 'bits of flesh' that Christine Angot left out on the pages to dry must have been fragile and resistant to translation. Nevertheless, Tess Lewis has attested her capacity to twist and turn in and through language ... The translator masterfully developed an intuitive relationship with the work of Christine Angot, endowing the English words with vibrating affectivity and ruptures ... Christine Angot’s book triggered both lauding and severe criticism, creating a work worth talking about; shedding light on issues that are not easily comprehensible—taboos—not from the position of an expert but from her own particularity, her own manner of writing. Voices echoing from the fractures, this is Incest: a collective adventure for the one that writes and the ones that read.
Read Full Review >>
Rave David Pratt,
Lambda Literary
For her raw rage and talent Angot is immensely admirable, but she is never cuddly or affable. Queer readers of L’Inceste might bristle immediately at her repeated insistence that she was 'homosexual' for only three months. In the book’s second sentence she actually says she was 'condemned' to be so. Angot often analyzes feelings and situations until her words disintegrate into a Gertrude Stein–like babble. In disintegrating and attempting desperately to reintegrate, Angot examines the process of writing—of expression—itself, along with every twist and turn of an obsessed, violated, powerless mind. The book is insanely alive, jolting the reader awake, daring to the reader fight to it; the reader emerges from these challenges dazed but uncertain who has 'won.'
Read Full Review >>
See All Reviews >>
SIMILAR BOOKS
Fiction

Girl A
Abigail Dean
Rave
What did you think of Incest?
© LitHub | Privacy