In the Shadow of the Banyan 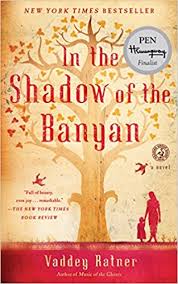 Using autobiographical facts, Vaddey Ratner’s debut fictional novel describes a family’s travails during the genocide carried out by the Khmer Rouge in Cambodia in the late 1970s.

What The Reviewers Say
Rave Ligaya Mishan,
The New York Times Book Review
In the Shadow of the Banyan, Vaddey Ratner’s first novel, tells the story of Raami’s struggle to survive under the Khmer Rouge ... How is it that so much of this bleak novel is full of beauty, even joy? ... Throughout, Ratner stays true to the perspective of a child. (To be sure, a child with a poetic bent.) ... As a work of fiction, In the Shadow of the Banyan is less a testament to atrocity than a reconciliation with the past.
Read Full Review >>
Positive Howard W. French,
The Wall Street Journal
Nearly 30 years later, novelist Vaddey Ratner, a Cambodian survivor of her country's descent into a maelstrom of self-destruction, has taken a markedly different approach. For a tale about genocide, In the Shadow of the Banyan is unexpectedly quiet ...instead of a tableau full of slaughter, Ms. Ratner offers an intimate account of the destruction of a single family during the Khmer Rouge's hold on power ...follows the wanderings of the girl and her family as they and other families are driven from one place to another, like cattle, by the revolutionary army ... The novel's fidelity to real life gradually turns out to be a source of weakness. Though rendered in often lovely prose and marked by many emotionally wrenching passages, In the Shadow of the Banyan feels insufficiently imagined, almost like a diary.
Read Full Review >>
Mixed Valerie Miner,
The Boston Globe
In the Shadow of the Banyan, Vaddey Ratner’s first book, is an autobiographical novel about Raami, a 7-year-old with polio, torn from her extended royal family in the mid-1970s during the Khmer Rouge regime ... The impetus for Ratner’s book is her own visceral memory of the terrifying passage from cosseted youth to homeless, crippled adolescent on the verge of death ... Like other novels relying too particularly on remembered experience, In the Shadow of the Banyan, veers into sentimentality and didacticism. This isn’t a fully imagined narrative so much as a (justifiable) indictment of the Khmer Rouge and an (understandable) hagiography of Ratner’s own father ...this story could have been told more powerfully with a more dexterous approach to content and style.
Read Full Review >>
See All Reviews >>
SIMILAR BOOKS
Fiction

Theatre of Marvels
Lianne Dillsworth
Positive
What did you think of In the Shadow of the Banyan?
© LitHub | Privacy