In the Land of the Cyclops 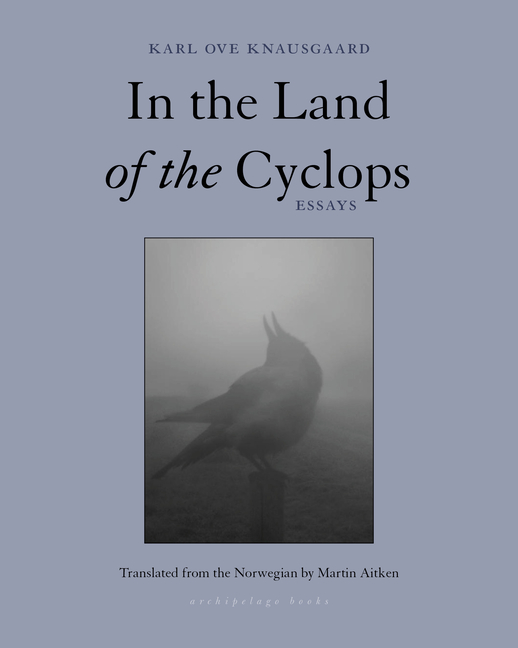 From the author of the six-volume My Struggle series, a collection of essays on art, literature, culture, and philosophy. Knausgaard reflects openly on Ingmar Bergman's notebooks, Anselm Kiefer, the Northern Lights, Madame Bovary, Rembrandt, and the role of an editor.

What The Reviewers Say
Positive Jessica Ferri,
Los Angeles Times
Between the slings and arrows born and the writer’s already well established tendency toward fruitful self-absorption, it is not surprising that Knausgaard spends too much time playing defense in In the Land of the Cyclops ... But when the veil of self-preservation lifts, the fine criticism is impossible to overlook ... His review of Michel Houellebecq’s controversial novel Submission is exquisitely done ... When he gets out of his own way, Knausgaard’s passion for interiority and the detail of the individual experience, the most brilliant elements of his fiction, come through.
Read Full Review >>
Rave Patricia Schultheis,
The Washington Independent Review of Books
... may prove to be less salacious but no less provocative. Or, at least, no less thought-provoking ... Neither confessional in the vein of David Sedaris nor meditative in the style of the Atlantic’s James Parker, these essays suggest the philosophical mode of Emerson, that of an observant, detached, analytic, earnest, and fearless interlocutor whose intellect ranges over a landscape as vast as the Scandinavian night sky ... The first 17 essays in In the Land of the Cyclops are philosophically illuminating, but somewhat didactic and stylistically ponderous. The same ideas appear several times, and Knausgaard’s digressions, while interesting, can be distracting. But then we come to the final offering, Ten Years Old, the one giving form to all the principles found in the rest ... his artistic genius makes us feel something has transpired. And it is monumental.
Read Full Review >>
Positive Meghan O Gieblyn,
The New York Times Book Review
Knausgaard’s critical writing does return obsessively to the question of artistic limits ... Reviewers of My Struggle frequently praised Knausgaard’s essayistic talent, and readers who enjoyed the novel’s digressions on, say, Dostoyevsky or Paul Celan will find here the same mingling of critical and personal reflection. A meditation on the northern lights detours into musings on Proust and Pascal ... The collection, which also includes essays on Michel Houellebecq, Cindy Sherman and Kierkegaard, reads less like a book of criticism at times than a work of negative theology, circling the mysteries of artistic creation ... In most cases, however, these airy speculations are saved by moments of self-searching that bring the meditation back to the personal and the concrete. To some extent, the collection is an extended reckoning with Knausgaard’s own creative process ... This artistic vantage, which Knausgaard inhabits so artfully throughout the collection, is abandoned rather abruptly in the title essay, which adopts a more defensive tone ... The essay is a blight — an outsize one, given that it shares the book’s name — on an otherwise fine collection and flatly contradicts what he has argued throughout its pages ... It is unfortunate when one of the very best occupants of that terrain ceases to see this as a necessary constraint and instead regards himself as the lone exile in a world full of monsters.
Read Full Review >>
See All Reviews >>
What did you think of In the Land of the Cyclops?
© LitHub | Privacy