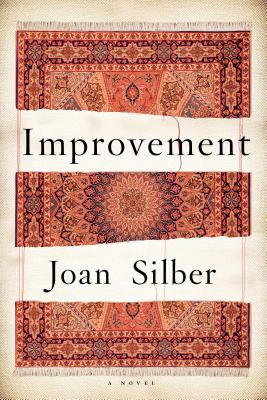 A novel about a young single mother living in New York, her eccentric aunt, and the decisions they make that have unexpected implications for the world around them.

What The Reviewers Say
Rave Kamila Shamsie,
The New York Times Book Review
In keeping with the Berger-esque philosophy, Silber writes her new novel, Improvement, as a series of interlinked stories, a generous structural decision that both allows characters to fully inhabit their own narratives and gives space to the lives that intersect or run parallel to them … Just as you think you’ve understood the narrative technique, which takes us into Reyna’s life through her relationships, Part II commences, shifting to third-person stories that seem to spool farther and farther away from Reyna...With a single tug on the narrative thread, we return to Reyna’s world...but this time we read her and her world differently, having passed through all these other stories that intersect hers, both literally and thematically. This is a novel of richness and wisdom and huge pleasure. Silber knows, and reveals, how close we live to the abyss, but she also revels in joy, particularly the joy that comes from intimate relationships.
Read Full Review >>
Rave Charles Finch,
The Washington Post
Now is the moment to appreciate that she is here, in our midst: our country’s own Alice Munro … Improvement is more certainly a novel, belonging first and last to a single mother named Reyna living in Harlem, though it alights briefly, like a songbird, in the lives of numerous other characters … What’s hard to convey is the riverine naturalness of Silber’s style. Like Grace Paley and Lucia Berlin, she’s a master of talking a story past its easiest meaning; like Munro, a master of the compression and dilation of time, what time and nothing else can reveal to people about themselves. She has an American voice.
Read Full Review >>
Rave Tara Ison,
The Los Angeles Review of Books
As the narrative weaves through its global roundelay — from Dieter’s romantic entanglements back in Germany to Bruno’s estranged daughter Monika’s art research in New York and Claude’s sister Lynnette’s dreams of opening her own eyebrow salon — characters new and old struggle with the central question: How does one evade responsibility for the uncomfortable results of one’s actions and choices, while retaining the comforting illusion of having any control at all over one’s destiny? … Improvement is a marvel of dimensionality, an astute, lyrical portrait of characters linked by their limits and their truths, by the choices that have shaped their lives, and by the destinies they have tried so hard to construct.
Read Full Review >>
See All Reviews >>
SIMILAR BOOKS
Literary

What Could Be Saved
Liese O'Halloran Schwarz
Positive
What did you think of Improvement?
© LitHub | Privacy