I Was the President's Mistress!! 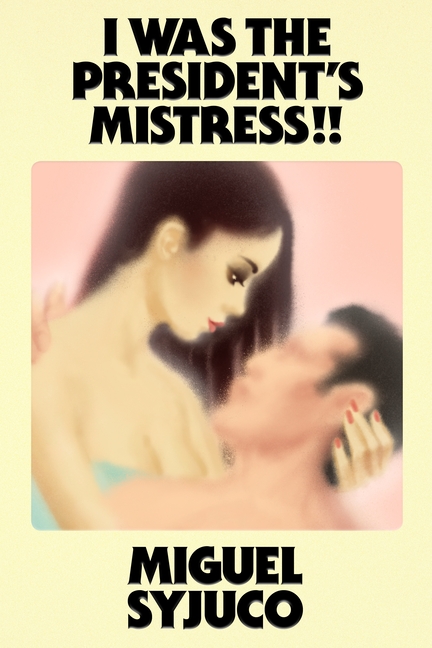 A satire about power, corruption, sex, and all the other topics you were told never to discuss in polite company. First came the Sexy-Sexygate scandal. Then an impeachment trial. Finally, a battle royale for the presidency. At the center of this political typhoon is Vita Nova, the most famous movie star in the Philippines and a former paramour of the country's most powerful man. Now, for the first time ever, she bares herself completely in a tell-all memoir that puts the sensational in sensationalistic.

What The Reviewers Say
Rave James Lasdun,
New York Times Book Review
It’s a rare novel that leaves you reeling simultaneously with admiration, exhaustion, amazement at its author’s reach and skill, and desolation at the world it spreads out before you. Add to that a dose of borderline despair for the future of our species, and you have a sense of how you’re likely to feel by the end of Miguel Syjuco’s flawed but formidable political satire, I Was the President’s Mistress!! ... These movers and shakers may have been caricatured for comic effect, but the sickly-sweet flavor of their lives comes across with an authenticity that suggests long and intimate exposure ... Whether by sheer diligence...or just some superior force of imagination, Syjuco manages to get the other half of society — the migrant workers, slum-dwellers, disenfranchised minorities — onto the page almost as vividly as the kleptocrats and media moguls. Novelistic empathy is observed to a fault: There are almost too many claims on the reader’s attention, too powerfully pressed, for the book to stand a chance of working in any conventional way ... These interviews are essentially dramatic monologues, and like the classics of the genre they are rich with deliberate evasiveness and accidental disclosure ... Most of the interview material points back into the past, while the real-time action of the impeachment drama happens entirely offstage. There are certainly suspenseful questions around the latter ... But we hear about these matters only incidentally, as the interviewees allude to them in passing. It’s an interesting formal device, but it mutes the story ... So we are left with the lovers’ monologues. If these were just polished exercises in voicing and mimicry, I’m not sure the book would be worth the demands it makes. But they are much more than that. The best of them strike me as miniature masterpieces of the form, combining technical virtuosity with a psychological penetration that exposes the precise emotional dynamic driving each of these warped and riven figures.
Read Full Review >>
Mixed Publishers Weekly
[A] rambunctious, uninhibited satire ... Graphic descriptions of sexual encounters end up feeling a little indulgent on the part of the author, and the plot remains thin, but the characterizations are vivid and often captivating nonetheless. Those willing to go along for a wild ride ought to be entertained by this tale of dirty tricks and dirty deeds.
Read Full Review >>
Positive Kirkus
The interview-transcript format stifles the novel’s arc somewhat, and everybody’s chatty tendencies wind up dragging the novel, despite its exclamatory provocations. But Syjuco’s most irreverent set pieces reveal how cultures can get a woman like Vita exactly backward—rather than the know-nothing sinner she’s dismissed as, she’s the scapegoat for everyone else’s greed and ineptitude. An ingenious if exceedingly chatty yarn about scandal-struck society.
Read Full Review >>
See All Reviews >>
SIMILAR BOOKS
Fiction

We Measure the Earth with Our Bodies
Tsering Yangzom Lama
Positive
What did you think of I Was the President's Mistress!!?
© LitHub | Privacy