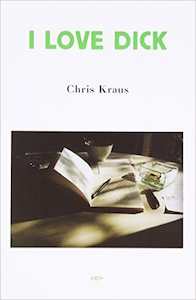 Considered a feminist classic, I Love Dick is a semi-autobiographical novel. In 1994, a married filmmaker on the verge of turning forty falls in love with a well-known art theorist named Dick. With the help of her French academic husband, she endeavors to seduce Dick. When he doesn't respond to her letters, husband and wife continue the correspondence for each other instead, imagining the fling the wife wants with Dick.

What The Reviewers Say
Rave Emily Gould,
The Guardian
Everyone is right: this is the most important book about men and women written in the last century. If you are not a man (or even if you are one) and you feel curious about why the current state of heterosexual relations leaves you feeling angry, empty or ill-used, you can use this book to explain yourself to yourself, and become a wiser, or maybe just more complicated, person.
Read Full Review >>
Rave Leslie Jamison,
The New Yorker
As a writer—especially as a woman who has written “personal” material—I’m grateful to Kraus for deploying the materials of her life in rigorous and compelling ways; for holding vulnerability “at some remove” in the face of those determined to read any act of self-disclosure as narcissistic or self-pitying. But as a reader, Kraus makes me confront my own hunger for autobiographical access; it makes me aware of how much I crave a sense of the true story beneath her written narratives, even as I respect the ways they refuse to deliver any kind of one-to-one correspondence between lived and constructed experience.
Read Full Review >>
Rave Jonathan Gibbs,
Independent
What remains so brilliant about the book is the real, useful thought that Kraus builds out of her romantic fantasy. This starts, though doesn't end, with her consideration of love and desire, how "sex short-circuits all imaginative exchange". Chris and Sylvère separate; Chris and Dick do sleep together, but still he remains distant, callous, even as Chris is driven to lonely despair, spending a cold winter holed up in Upstate New York. She gets lost in the woods and nearly dies, and goes to the toilet in the yard because the pipes in her house have frozen: images such as these go a long way to balancing out the discussions of critical theory - Deleuze and Guattari and the like - that dominate later parts of the book...You can call it a novel, then, but it's as a philosophical and cultural critique that I Love Dick bites hardest.
Read Full Review >>
See All Reviews >>
SIMILAR BOOKS
Coming Soon

The Last Karankawas
Kimberly Garza
Rave
What did you think of I Love Dick?
© LitHub | Privacy