I Find Your Lack of Faith Disturbing: Star Wars and the Triumph of Geek Culture 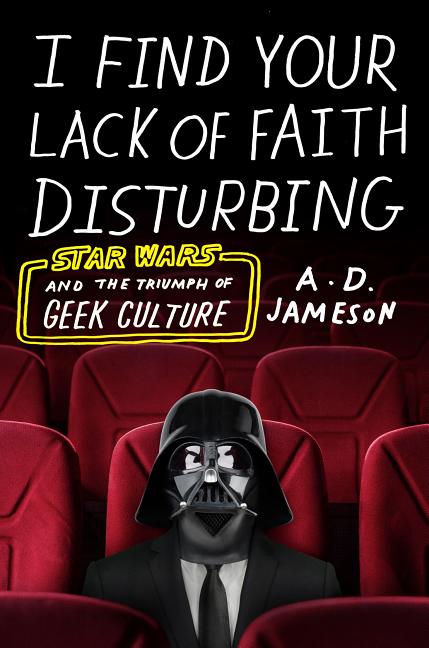 In this analysis-cum-manifesto, the author explores how and why once-marginalized "geek culture" has found its way into the mainstream even as, he argues, comics and other geeky art forms are underestimated by "prestige critics."

What The Reviewers Say
Rave Steve Donoghue,
Open Letters Review
Books on this subject almost always display a maddening combination of condescension and inaccuracy...and Jameson avoids it so completely that he defuses even the anxiety of waiting for it; you follow him into a discussion of TV superheroes or Frank Miller's Dark Knight Returns eagerly wanting to know what he thinks rather than nervously waiting for him to make some basic mistake. Jameson's portrait of that broader social context is uniformly fascinating ... It's unclear to me how far I Find Your Lack of Faith Disturbing will convert any holdout members of that embattled remnant of the mainstream—but oh, how it will delight the faithful!
Read Full Review >>
Rave Kristine Huntley,
Booklist
Jameson makes a passionate argument for the depth of these no-longer-fringe entertainments, pointing out the realism within the fantasy and how sf, fantasy, and superhero tales tackle issues personal and political ... A thoroughly engaging and enjoyable look at the evolution of geek culture over the past four decades.
Read Full Review >>
Mixed Jonathan Liebson,
The Washington Post
A self-described geek, Jameson aligns himself with enlightened critics who view the 1970s as a crucial turning point in American cinema ... However ... Star Wars, he contends, is actually a stepbrother of the realist genre ... On this front, Jameson is persuasive ... He owns up to a childhood of being picked on and the sanctuary he found in the 'Geek Dorm' at college. His personal story adds a lighter touch to the book’s wonkiness, and it’s hard not to share his enthusiasm as he describes how his favorite characters colonized a world that once ridiculed them. Unfortunately, when Jameson turns to the evolution of comic-book superheroes...the book begins to stall—just as it does later when it details the numerous reference guides, games and other auxiliaries through which fantasy worlds grow ever-deeper roots. With so much fetishizing, Jameson’s work soon embodies the very dilemma he raises about a nerdy culture gone mainstream: how to appeal to both 'entrenched' fans and non-geeks alike?
Read Full Review >>
See All Reviews >>
What did you think of I Find Your Lack of Faith Disturbing: Star Wars and the Triumph of Geek Culture?
© LitHub | Privacy