I Can't Talk about the Trees Without the Blood 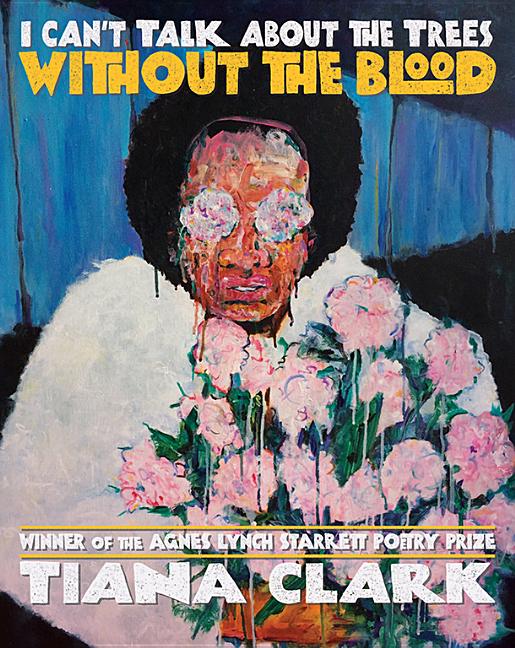 Winner of the 2017 Agnes Lynch Starrett Poetry Prize, I Can't Talk About the Trees Without the Blood delves into personal and public histories, explicating memories and muses around race, elegy, family, and faith by making and breaking forms as well as probing mythology, literary history, her own ancestry, and, yes, even Rihanna.
Rave
Based on 6 reviews

What The Reviewers Say
Positive Claire Oleson,
The Kenyon Review
The collection moves on to have conversations with Phillis Wheatley, Kanye West, and Nina Simone; it invokes the myth of Orpheus and Rihanna’s music; and it adapts lines from Toni Morrison’s Sula. This intertextuality of much of Clark’s work contextualizes her use of language and the personal nature of much of her poems ... Clark’s poems converse with each other as well, often mentioning a previously described event from a new or more detailed angle, allowing the book to become a work which asks to be read sequentially and as a whole to be best comprehended. These pieces invite the reader to witness the past as a mobile and volatile thing that inevitably relates to and impacts our present ... Moving through I Can’t Talk About the Trees Without the Blood, the reader tours a work that is part autobiography, part dialogue between a mottled history and a contemporary persona. At the synthesis between these two narrative lines, Clark reaches the communicated revelation that the title partially suggests—no body exists without historical association and context in this world and more specifically, this America which is anything but post-racial. Clark unveils an individual history which irrevocably belongs to a world history, as well as vice versa, in this collection that educates as well as artfully brings a life into a legible and concrete experience.
Read Full Review >>
Rave Emily Choate,
Nashville Scene
Clark’s poems operate at a high pitch. They startle. They challenge. They demand full attention. They invoke a glorious pantheon of muses, companions and ghosts. Through her own inventive use of form and voice, Clark shapes an original path through the works of other artists — from Toni Morrison and Carrie Mae Weems to Balanchine and Stravinsky, Kanye and Rihanna ... With I Can’t Talk About the Trees Without the Blood, Clark emerges as a necessary voice from the contemporary South.
Read Full Review >>
Rave Mike Good,
Full Stop
... it juxtaposes poems that suggest autobiographical narrative against lyrical and persona poetry ... It often feels like a Russian doll, a box within a box that helps the poet push its polyvocal ends towards harmony ... a window where a reader could glimpse some of the complexity and interiority of one moment of black experience, rendered here as constant moral contradiction ... The framing device affords the writer and speaker a directness that I often find difficult to plant in contemporary poetry without sounding self-indulgent ... There is a rare but certain effect I find almost exclusively in the best of poetry — where reading and hearing what is read, literally quickens the reader’s pulse — and this is the experience that found me in Tiana Clark’s debut.
Read Full Review >>
See All Reviews >>
SIMILAR BOOKS
Fiction

Fantasia for the Man in Blue
Tommye Blount
Rave
What did you think of I Can't Talk about the Trees Without the Blood?
© LitHub | Privacy