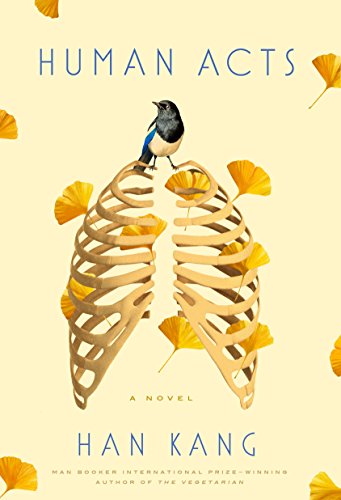 In the midst of a violent student uprising in South Korea, a young boy named Dong-ho is shockingly killed. The story of this tragic episode unfolds in a sequence of interconnected chapters as the victims and the bereaved encounter suppression, denial, and the echoing agony of the massacre.

What The Reviewers Say
Rave Nami Mun,
The New York Times Book Review
Han is smart to focus not on the gruesomeness of Dong-ho’s work — which would be redundant, melodramatic and expected — but on its mundanity ... In essence, we witness the impossibly large spectrum of humanity, and wonder how it is that one end could be so different from the other. To explore that spectrum, the book’s polyphonic structure comes across as necessary and natural. Each chapter offers a piercing psychological portrait of a character affected by the Gwangju massacre ... shows Han’s imaginative and meaningful obsession with violence upon the body. It also reveals another, perhaps more fundamental, obsession: dissonance. Each chapter explores what happens when two seemingly dissimilar or even opposing elements try to coexist: when innocence is surrounded by violence, when the dead keep on living, when survivors live like the dead, when freed prisoners still feel imprisoned and when the past becomes the present ... It is Han’s graceful ballet along this fine line, artfully replicated in Deborah Smith’s translation, that makes this harrowing book about the Gwangju massacre compulsively readable, universally relevant and deeply resonant ... Human Acts is, in equal parts, beautiful and urgent. Though it might not have been Han’s intention, her novel reads not only as a lyrical post-mortem on violence but also a call to counter that violence.
Read Full Review >>
Rave Eimear McBride,
The Guardian
This is a book that could easily founder under the weight of its subject matter. Neither inviting nor shying away from modern-day parallels, Han neatly unpacks the social and political catalysts behind the massacre and maps its lengthy, toxic fallout. But what is remarkable is how she accomplishes this while still making it a novel of blood and bone ... By choosing the novel as her form, then allowing it to do what it does best – take readers to the very centre of a life that is not their own – Han prepares us for one of the most important questions of our times: 'What is humanity? What do we have to do to keep humanity as one thing and not another?' She never answers, but this act of unflinching witness seems as good a place to start as any.
Read Full Review >>
Rave Thrity Umriga,
The Boston Globe
Owing to Deborah Smith’s skillful and painstaking translation, each story is presented in an inventive way ... But where Kang excels is in her unflinching, unsentimental descriptions of death. I am hard pressed to think of another novel that deals so vividly and convincingly with the stages of physical decay. Kang’s prose does not make for easy reading, but there is something admirable about this clear-eyed rendering of the end of life.
Read Full Review >>
See All Reviews >>
SIMILAR BOOKS
Fantasy

The Falcon's Eyes
Francesca Stanfill
Positive
What did you think of Human Acts?
© LitHub | Privacy