How to Set a Fire and Why 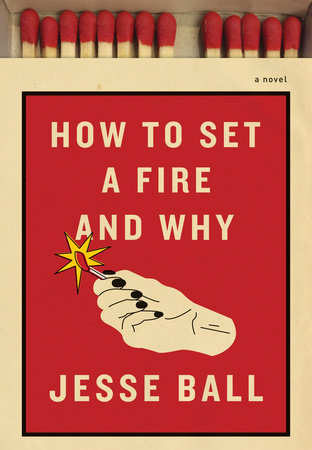 "A teenage girl. A shattering loss. An obsession with a secret arson club. This is the story of a girl who has nothing and will burn anything."

What The Reviewers Say
Rave Anthony Domestico,
The Boston Globe
...the most remarkable achievement of this novel, is its narrative voice. It belongs to Lucia Stanton, the novel’s disaffected, Holden Caulfield-style young narrator and heroine. Lucia is a marvelous creation and the richness of her voice — its intelligence, its casual precision — is felt on the very first page ... What makes How to Set a Fire and Why so radical, though, isn’t its politics. At least within Ball’s career, the novel is radical because of how traditional — how voice- and character-driven — it all feels. (I mean that as a compliment.) To deeply inhabit a character’s perspective and voice, Ball suggests, can be its own form of rigorous experimentation.
Read Full Review >>
Rave Nathaniel Rich,
The Atlantic
One of the triumphs of the novel is the delicacy with which Ball opens his narrator’s smart-aleck voice just wide enough to admit a sincere measure of wonder and dread ... How to Set a Fire and Why has the mood of a thriller but the plot of a coming-of-age novel. Although Lucia’s efforts to join her local Arson Club, and later to get revenge on an evil landlord, give structure to the narrative, much of the novel is devoted to Lucia’s thoughts about morality and 'the false parade of garbage that characterizes modern life.' Ball calls himself a fabulist but he is also a deeply moral writer, with a fine sense of tragedy.
Read Full Review >>
Mixed Scott Bradfield,
The New York Times Book Review
How to Set a Fire and Why is about as close to verisimilitude as Ball usually gets ... [it] journeys into new and fruitful territory for Ball — not entirely successfully. For while the voice of Lucia is funnier, sharper and more poetic than the deliberately flat and inexplicit prose of his previous books, and the American landscape he depicts is far more terrifying than any Kafkaesque prison, this novel gradually loses focus as it develops ... It may be Ball’s deliberate strategy to make us watch his story drift away into a fog of vague language, but it also fails to bring out what is most memorable about one of his most vivid and engaging characters, Lucia Stanton.
Read Full Review >>
See All Reviews >>
SIMILAR BOOKS
Coming Soon

Night of the Mannequins
Stephen Graham Jones
Rave
What did you think of How to Set a Fire and Why?
© LitHub | Privacy