How to Love the Universe: A Scientist's Odes to the Hidden Beauty Behind the Visible World 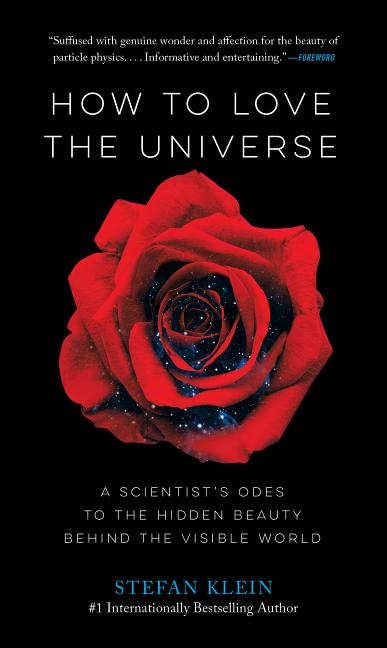 In 10 short chapters of lyrical prose, a German physicist uses everyday objects and events as a springboard to meditate on the beauty of the underlying science.

What The Reviewers Say
Rave Anna Call,
Foreword Reviews
Suffused with genuine wonder and affection for the beauty of particle physics, How to Love the Universe is an informative and entertaining entry into a challenging field ... Its chapters reflect the beauty of dark matter and photons in words that often verge on poetry ... general background will not overwhelm newcomers or bore experienced physics buffs ... In the tradition of good essayists everywhere, Klein writes in digestible bursts, each chapter dealing with a new subtopic of theoretical physics and capable of standing on its own. Particularly notable is the author’s versatility. Whether drawing a fictionalized analogy or explaining the relative size of an atomic nucleus, the otherwise complicated subject matter remains accessible ... The book draws connections between ancient comets and the dew on a rose petal and paints humanity’s curiosity itself as a result of our participation in a vast and dynamic universe. As a result of this approach and the author’s literary skill, the book bears an emotional heft unusual among scientific literature. How to Love the Universe is likely to have broad appeal. Its breadth will endear it to audiences that read the news about Higgs bosons and gravitational waves but find themselves at a loss about what these phenomena mean to the advancement of the human species.
Read Full Review >>
Pan Jacob Brogan,
The Washington Post
Many of these topics already exude an inherent gee-whiz quality, but Klein wants to show us that they are even more peculiar than they seem ... Always squinting at the fuzzy edge of the horizon, Klein insists we should be most amazed by the things we suspect but can never fully know ... He writes, for example, of a storm that scientists failed to predict because the equipment at a single outlying weather monitoring station wasn’t calibrated properly. By my read, this feels more like a failure of scientific instrumentation and process than like evidence that we can never fully untangle the knot of reality. Nevertheless, such events lead him to oddly metaphysical musings ... nonsensical phrases suggest that Klein longs to be one with the poets he criticizes. Perhaps this is why he, a trained physicist, tends to treat hard-won scientific realizations as if they were still-mysterious puzzles, often making them more difficult to understand than they would be otherwise ... Eager to astonish, Klein prizes mystery over solution. Thus, we find him working by sleight of hand, often starting with questions before establishing a foundation of understanding. Science may well make the world stranger, but it helps no one to estrange us from science.
Read Full Review >>
Positive Dawn Lowe-WIncentsen,
Library Journal
Who, or what can guarantee that the world is more than just imagination? This book by Klein...answers this question and more ... However, in the order presented, the narrative gives a greater picture of the known universe ... Klein sets forth to share the poetry of the universe and succeeds, offering a grounding in the science and beauty that comprises the world around us. The text is easily attainable to casual readers and scientists alike, and will help both to understand the universe better.
Read Full Review >>
See All Reviews >>
What did you think of How to Love the Universe: A Scientist's Odes to the Hidden Beauty Behind the Visible World?
© LitHub | Privacy