How to Disappear: Notes on Invisibility in a Time of Transparency 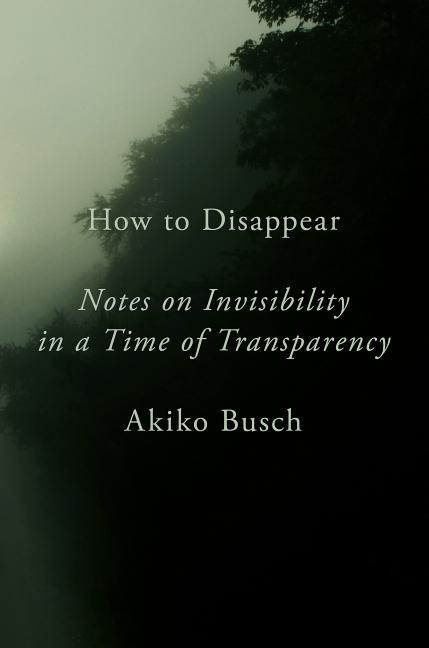 Explores the idea of invisibility in nature, art, and science, in search of a more joyful and peaceful way of living in today's increasingly surveilled and publicity-obsessed world.

What The Reviewers Say
Positive Gal Beckerman,
The New York Times Book Review
... Busch offers [a field guide for invisibility], roaming from essay to essay in a loose, associative style, following invisibility where it takes her — from childhood and the comfort of imaginary friends to middle age and the feeling of disappearing as a sexual object: a sensation, she argues, that can form the basis of a new, and positive, form of selfhood ... Inconspicuousness can be powerful — this may be Busch’s most radical point, especially at a moment when we’re conditioned to think power means yelling louder than everyone else in your Twitter feed, or showing the world on Instagram how you’re living your best life.
Read Full Review >>
Pan Michael S. Roth,
The Washington Post
There are insightful pages on British zoologist Hugh B. Cott’s work on how animals fool one another by blending in with their surroundings ... Busch’s subtitle signals that she’s providing only notes on invisibility. Her slim volume lacks a general argument. Instead, the author shares her enthusiasms for the natural world and for how one can position oneself to catch a glimpse of those things that shine through the obscurity around them ... Underwater, though, Busch loses me, and when she asserts that 'submerged, I have become a refugee from the visible world,' I am visibly rolling my eyes ... Field guides need to be precise, and although there are some fine moments in How to Disappear, Busch can be a bit wooly ... A discussion of the 'vanishing self' may belong in a book on invisibility, but when Busch writes of an anesthesia before minor surgery producing the 'most blissful' moments of boundless 'gratitude' and 'an ineffable accommodation by a larger and supremely benign sphere of existence,' this guide eludes me.
Read Full Review >>
Pan Lily Meyer,
NPR
Busch, a practiced art and nature writer, dislikes social media and networked culture: that much is clear. What she neglects to explore is why ... When Busch moves in details, she does so strikingly well. Her best essays, 'Invisiphilia' and 'Across the Natural World,' are richly allusive and digressive ... But in her society essays, Busch casts detail, and often beauty, aside. In the collection's first essay, on imaginary friends as a stage in childhood development, she pivots without warning from her chosen topic to a long digression on the damages of social media. Her writing about imaginary friendship is replete with research, literature, and anecdotal evidence; her writing about social media is full of sweeping we-statements, with only one source cited and no examples or anecdotes at all. Not only does the digression fall flat as a result, it drags the rest of the essay down with it ... This proves to be a pattern. Time and again, Busch condemns online visibility without exploring it ... Busch does not seem open to counterarguments. In general, she refuses to attend to perspectives that don't match her own ... fails intellectually because Busch never accesses the bodies of work that don't suit her ... Busch set out to create an antidote to visibility culture, but all she does, in the end, is expose herself.
Read Full Review >>
See All Reviews >>
What did you think of How to Disappear: Notes on Invisibility in a Time of Transparency?
© LitHub | Privacy