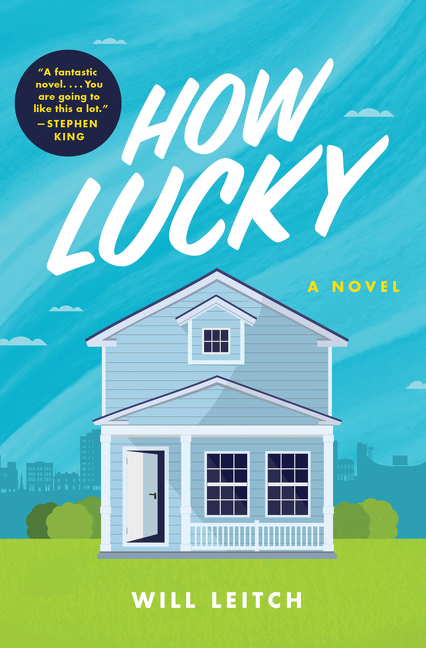 Largely confined to his home, Daniel spends the hours he's not online communicating with irate air travelers observing his neighborhood from his front porch. One young woman passes by so frequently that spotting her out the window has almost become part of his daily routine. Until the day he's almost sure he sees her being kidnapped.

What The Reviewers Say
Positive Hamilton Cain,
The Washington Post
... witty, vigorously written ... In bold, brilliant strokes Leitch evokes the eccentricities of Athens, haunted in equal parts by the ghosts of R.E.M. and legendary coach Vince Dooley ... Leitch draws his cast beautifully ... Although able-bodied, Leitch has modeled Daniel on the son of a friend, vetting his character meticulously. And yet there’s a nagging sense of one-degree-removed that mars his novel. Although SMA phenotypes vary widely, he gets a few crucial details wrong, or at best half-right, from the functions of the cough-assist to the disease’s progression to a desultory mention of such transformative drugs as Spinraza. Occasionally Daniel veers into tutorials on the disease — one feels the hand of a sensitivity reader at work – but lapses stand out ... Fortunately, How Lucky picks up the trail of its own meandering through-line as Daniel homes in on Ai-Chin’s fate ...It’s a tricky exercise when a writer steps outside his own personal experience to inhabit a character very different from himself; but How Lucky succeeds on more than just luck. With only a few missteps Leitch gives us an authentic, compelling portrait of a narrator who motors through the obstacle course of his life with grit and grace, a sprinkling of sex and a surfeit of curse words. Daniel may be locked in a physically atypical body, but he’s just as human as the rest of us.
Read Full Review >>
Positive Sam Sacks,
The Wall Street Journal
﻿The crime drama in How Lucky is, it has to be said, pretty ludicrous ... If you can overlook all that, however, you’ll find a touchingly imagined portrait of friendship and community ... The illness, violence and pathological hatreds that dominate our news feeds run throughout How Lucky, but Mr. Leitch is one of many novelists trying to bring to life the connections that persist despite them.
Read Full Review >>
Mixed Tod Goldberg,
USA Today
Leitch does a terrific job embodying Daniel – his humor, his wisdom, his pettiness, his physical space – so that when he witnesses a young woman named Ai-Chin being abducted, we are immediately invested. How will Daniel ever solve this crime? And that’s where How Lucky crumbles under its own ambition. Because while Daniel’s life isn’t thrilling, unfortunately neither is Leitch’s book ... Leitch obfuscates drama with chapters of backstory on everything from the history of Athens to Daniel’s childhood friendship with Travis, and at absolutely the wrong time, a long discourse on Daniel’s mother’s fight with cancer, before returning to the laborious messages, which hit on every known cliche in the psychopath handbook ... becomes almost epistolary in its form the longer it progresses, which makes it claustrophobic and passive, and is further hampered by Leitch using direct address throughout, giving the narrative a chummy feel that waters down nearly every dramatic moment. If the narrator feels free to chat with us, the odds are fair he’s going to make it through the most drastic near-death event, including the remarkably absurd climax, which strains both believability and plausibility – imagine Encyclopedia Brown tying up a case up with the help of some flash-bang grenades and America’s most inept police force – but readers will be long past caring at that point. More troubling, we know no more about the missing woman, Ai-Chin, on page 300 than we did on page one. She is a conceit, not a character ... It’s a shame, really, because Leitch has created an indelible character in Daniel, a hero we want desperately to root for, a would-be amateur detective who could teach us about the value of human life along the way, if only he got a decent case to solve.
Read Full Review >>
See All Reviews >>
SIMILAR BOOKS
Coming Soon

Fellowship Point
Alice Elliott Dark
Rave
What did you think of How Lucky?
© LitHub | Privacy