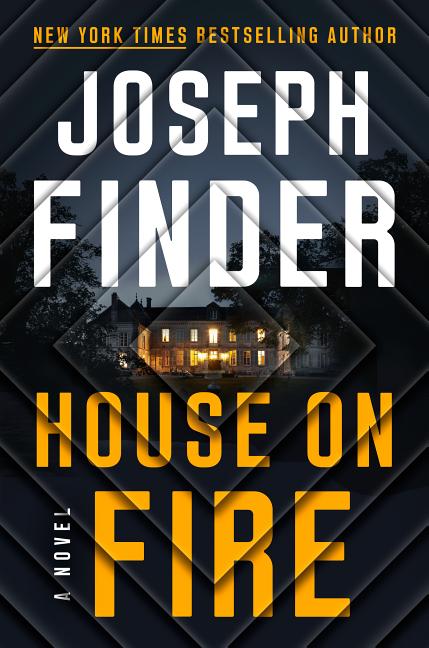 Nick Heller is at the top of his game when he receives some devastating news: his old army buddy Sean has died of an overdose. Sean, who once saved Nick’s life, got addicted to opioids after returning home wounded from war. Then at Sean’s funeral, a stranger approaches Nick with a job, and maybe also a way for Nick to hold someone accountable.

What The Reviewers Say
Rave Jeff Ayers,
The Associated Press
Finder has crafted a timely and well-written thriller that engages the reader with an uncomfortable topic in unexpected ways. The author tackles the subject head-on, and by taking one of his best characters and giving him personal stakes, the intensity of the story shines. House on Fire will be remembered as one of Finder’s best.
Read Full Review >>
Rave The Real Book Spy
Joseph Finder pulls out all the stops for this one, delivering another heart-stopping thriller that’s not to be missed. Heller, one of the genre’s best characters, has always thrived under pressure—but his ability to stay calm, cool, and one step ahead of the bad guys is suddenly tested like never before. That tension drives the story early, setting the table for a knockout final act that will certainly leave readers hoping Finder doesn’t take four more years to release the series’ fifth book.
Read Full Review >>
Rave Joe Hartlaub,
Bookreporter
Finder utilizes his extensive research abilities with current events to make House on Fire yet another winner in this series. There are subtle but significant parallels displayed between Heller and Raymond Chandler’s Marlowe, with enough differences incorporated into Finder’s creation to make him utterly unique. Fans of financial thrillers and private-eye fiction will find much to love here.
Read Full Review >>
See All Reviews >>
SIMILAR BOOKS
Coming Soon

On Java Road
Lawrence Osborne
Rave
What did you think of House on Fire?
© LitHub | Privacy