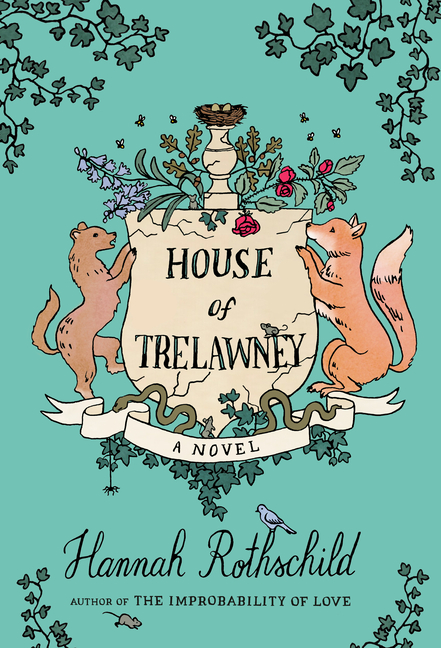 In House of Trelawney, an eccentric family of impoverished British aristocrats rattle around their crumbling stately home and fight to stay afloat during hard times.

What The Reviewers Say
Rave Kate Saunders,
The Times (UK)
In the dying years of the past century there was a seemingly endless appetite for this sort of novel ... This is Jilly Cooper territory, with a whiff of Joanna Trollope; a lavish saga about privileged people behaving badly ... Rothschild is a writer of high intelligence, however, and she shakes these dear old tropes up into something more akin to John Lanchester’s blistering contemporary satire Capital ... Rothschild teases out the green shoots with skill and humour...Her characters make unexpected discoveries about themselves — hidden talents that could lead to money, or at least fulfilment. In the present century, the dilapidation of their ancestral home might be a bigger asset than its historical splendour ... If we take House of Trelawney as a light-hearted state-of-the-nation novel, it says a lot about the dangers of dwelling on past entitlement and the importance of unsentimental realism. Nobody gets anything for nothing — certain members of the royal family could learn something here.
Read Full Review >>
Rave Cay Wren,
The Manhattan Book Review
Rothschild does a wonderful job weaving the ornate past of Trelawney into the complicated now. The eccentric family members interact with the space on their own unique terms, and every Trelawney player gets their moment in the story. The overall affect is a charmingly discordant family coping with their resplendent past and wholly muddled future. Rothschild effectively weaves an engaging tale of redemption and family bonds that comes off as both utterly untranslatable, but emotionally connective to the reader at the same time. It is a delightful escape and will leave you mentally roaming the halls of the house of Trelawney long after the last page has turned.
Read Full Review >>
Positive Lucy Atkins,
The Sunday Times (UK)
Hannah Rothschild...is brilliant at unhinged aristos. The poisonous, deluded old matriarch Clarissa, who still puts on silks and furs for dinner, even though the servants are long gone and it’s a Chinese takeaway, is particularly good ... House of Trelawney is...an oddly uneven novel. There are coups de foudre, galloping horses, erotic cornfield romps and scheming beauties that might not be out of place in a Mills & Boon romance ... And yet this is also a charming satire that, save a few stodgy passages about money, is never dull ... Rothschild — a member of the banking dynasty and presumably no stranger to warped families and staggering wealth — is a witty, stylish storyteller and her overall message definitely feels timely.
Read Full Review >>
See All Reviews >>
SIMILAR BOOKS
Coming Soon

The Charmed Wife
Olga Grushin
Mixed
What did you think of House of Trelawney?
© LitHub | Privacy