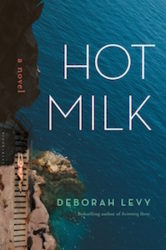 "Sofia, a young anthropologist, has spent much of her life trying to solve the mystery of her mother’s unexplainable illness. She is frustrated with Rose and her constant complaints, but utterly relieved to be called to abandon her own disappointing fledgling adult life. She and her mother travel to the searing, arid coast of southern Spain to see a famous consultant--their very last chance--in the hope that he might cure her unpredictable limb paralysis."

What The Reviewers Say
Rave Sarah Lyall,
The New York Times
What makes the book so good is Ms. Levy’s great imagination, the poetry of her language, her way of finding the wonder in the everyday, of saying a lot with a little, of moving gracefully among pathos, danger and humor and of providing a character as interesting and surprising as Sofia. It’s a pleasure to be inside Sofia’s insightful, questioning mind.
Read Full Review >>
Positive Lionel Shriver,
The Financial Times
Deborah Levy conveys an atmosphere of out-of-kilter surreality without ever violating the rules of realism. There’s no magic here, aside from the supernatural powers of peculiar prose ... Achieving quite a feat of memory and imagination for an author in her mid-fifties, Levy gives convincing voice to the foundering, floundering sensation of the mid-twenties ... The prose is often jagged, abrupt, even savage, but the narration is leavened with a touch of drollness, and I wouldn’t want to suggest this novel is a big, dark drag. It’s entertaining and reads swiftly. But it’s also strange.
Read Full Review >>
Mixed Leah Hager Cohen,
The New York Times Book Review
In Hot Milk Levy has spun a web of violent beauty and poetical ennui. As a series of images, the book exerts a seductive, arcane power, rather like a deck of tarot cards, every page seething with lavish, cryptic innuendo. Yet, as a narrative it is wanting ... The symbols here, although entrancing individually, feel at once overdetermined and underpurposed. They never fully ­cohere into a satisfying web.
Read Full Review >>
See All Reviews >>
SIMILAR BOOKS
Coming Soon