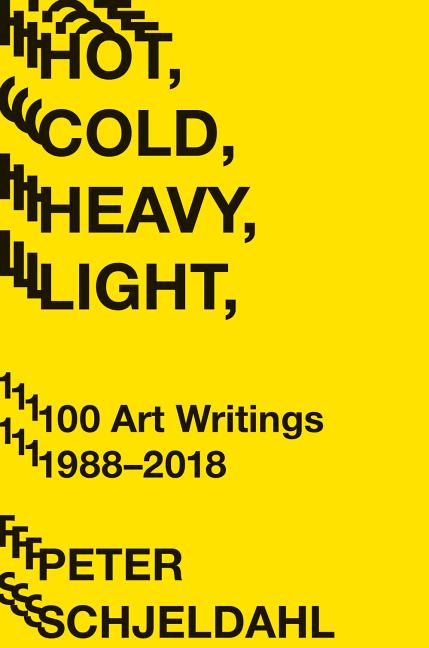 Hot, Cold, Heavy, Light collects 100 writings—some long, some short—that taken together forma group portrait of many of the world’s most significant and interesting artists. From Pablo Picasso to Cindy Sherman, Old Masters to contemporary masters, paintings to comix, and saints to charlatans, Schjeldahl ranges widely through the diverse and confusing art world, an expert guide to a dazzling scene.

What The Reviewers Say
Rave Charles Finch,
The New York Times Book Review
Like Lydia Davis, [Schjeldhal] writes with remarkable tensile beauty and closeness of observation ... With artist after artist in Hot, Cold, Heavy, Light, Schjeldahl arrives at some similarly unexpected yet exacting truth ... He has the ability to freeze an artist cold in a line, not through aphorism, which implies a slinking away from the specific, but with meticulous, writerly precision ... what separates Schjeldahl is the tangible sense in nearly every piece in this book — say 85 of the 100 — that something existential is at stake as he writes. The same sensation is present in Barthes and Sontag ... Schjeldahl seems to find in art the unmediated experiences of living — humor, anger, sadness, perplexity, beauty, sex. He is especially moving when moved, himself, to reverence ... I know that art is only a small part of living, but it’s also true that there are people whose makeshift faith lies in the best things human beings have made. Schjeldahl grants those artifacts a corresponding dignity, with all the meaning we knew they had but could not describe ourselves. It’s astonishing; it astonishes.
Read Full Review >>
Rave Robert Israel,
The ArtsFuse
Schjeldahl is an anomaly among contemporary art critics in that he lacks an academic pedigree. His formal education ended with his high school diploma. Readers who approach art criticism expecting acknowledgement of contemporary theory will be disappointed; Schjeldahl cites art scholars, but his preference is to tell the reader, via Midwestern plain speech, what he sees and what he thinks we should find in art ... Schjeldahl, in the thirty-year span this book covers, demonstrates that he has evolved into a passionate craftsman and illuminating critic ... to this critic’s credit, he is difficult to pin down. Along with this elusiveness, Schjeldahl expresses his delight in the art he sees before him with an adroit wit. And he conveys a convincing warmth for the artists under review. But his empathy does not obstruct the resoluteness of his verdicts, which are articulated with honestly, precision, and audacity.
Read Full Review >>
Rave John Timpane,
The Philadelphia Inquirer
[Schjeldhal] is a practicing poet, and the poet’s specificity and clarity are his biggest assets. He’s also witty, and mostly, or at least usually, without the unearned hauteur that so many art critics seem obliged to assume ... One glory of this book is the way Schjeldahl writes about female artists. Essays on Neel, Laura Owens, and Laura Harrison are among the book’s best ... The best single thing in this book is The Ghent Altarpiece, in which Schjeldahl discusses the elaborate efforts to preserve and protect the masterwork (thought to be largely by Jan van Eyck), and in which he rises to some of his best description of 'hands that touch and grip with tangible pressures, masses of hair given depth and definition by a few highlighted strands.' He then adds: 'Overall, the pictures generate a sweet and mighty visual music.' Much the same is true of this gorgeously yet precisely written collection.
Read Full Review >>
See All Reviews >>
What did you think of Hot, Cold, Heavy, Light?
© LitHub | Privacy