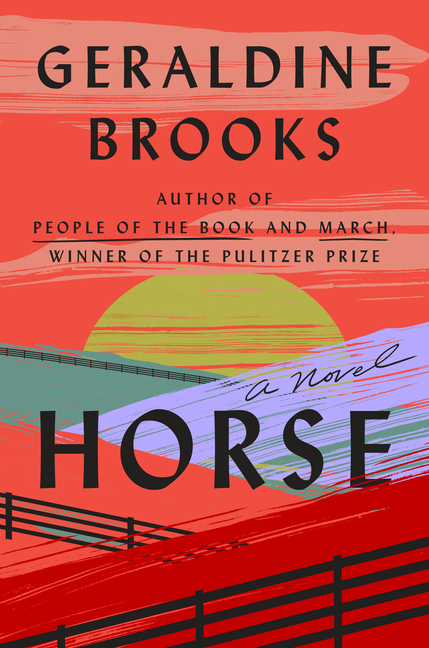 Kentucky, 1850. An enslaved groom named Jarret and a bay foal forge a bond of understanding that will carry the horse to record-setting victories across the South. When the nation erupts in civil war, an itinerant young artist who has made his name on paintings of the racehorse takes up arms for the Union. On a perilous night, he reunites with the stallion and his groom, very far from the glamor of any racetrack. New York City, 1954. Martha Jackson, a gallery owner celebrated for taking risks on edgy contemporary painters, becomes obsessed with a nineteenth-century equestrian oil painting of mysterious provenance. Washington, DC, 2019. Jess, a Smithsonian scientist from Australia, and Theo, a Nigerian-American art historian, find themselves unexpectedly connected through their shared interest in the horse—one studying the stallion's bones for clues to his power and endurance, the other uncovering the lost history of the unsung Black horsemen who were critical to his racing success.

What The Reviewers Say
Rave Anna Mundow,
Wall Street Journal
... thrilling ... This layout may seem a little too neat—and, indeed, the symmetry of the novel’s interlocking plots might well have dulled its emotional effect were it not for Ms. Brooks’s almost clairvoyant ability to conjure up the textures of the past and of each character’s inner life ... Above all, she makes us both impatient to see and fearful to learn what might befall Theo, the black graduate student who rediscovers the painting, and, centuries earlier, Jarret, the enslaved horseman whose story forms the heart of the novel ... Alongside this personal drama, Ms. Brooks expertly stages the larger one of the Civil War ... Chapters set in the 19th century are therefore richly populated and dense with talk of emancipation, sedition and corruption. Yet none of this seems forced or perfunctory. Ms. Brooks’s felicitous, economical style and flawless pacing—the way she smoothly accelerates from languor to high adventure—carries us briskly yet unhurriedly along. And the novel’s alternating narratives, by suspending time, also intensify suspense ... Ms. Brooks folds into a love story the weighty matter of racism and its lethal consequences without stalling the graceful narrative flow.
Read Full Review >>
Rave Maggie Shipstead,
Washington Post
These are the ingredients with which Geraldine Brooks begins her new novel, Horse, and, goodness, they are just as beguiling as her fluid, masterful storytelling ... I raced through the novel’s first half and then slowed and slowed as I went on, so worried for what might happen to Jarret and Theo and to Lexington that I could hardly bear to find out. Horse is not a grim book, but it did sometimes make me very angry, and it did make me cry. Horse is a reminder of the simple, primal power an author can summon by creating characters readers care about and telling a story about them — the same power that so terrifies the people so desperately trying to get Toni Morrison banned from their children’s reading lists.
Read Full Review >>
Rave Alexandra Jacobs,
New York Times Book Review
Brooks focuses on two young Black men, giving them richly layered backgrounds and complicated inner lives (in an afterword, she thanks among others her son Bizu, whom she and her late husband, the author Tony Horwitz, adopted from Ethiopia, for insight into the modern Black experience) ... Part of Brooks’s project, developed in the wake of George Floyd’s murder, is to show that Theo, despite 21st-century autonomy and a privileged background — he’s the son of diplomats, attended Yale and Oxford and has what a friend calls a 'Lord Fauntleroy accent' — can never really relax because of his skin color. (To which some readers may respond: 'Duh?') ... Their affair, which starts fumblingly and then takes a hard, melodramatic turn, feels like something of a skeleton mount, merely a place where their professional lives can intersect. Here, Brooks has done considerable homework, and deserves, by my lights, a top grade ... Brooks’s chronological and cross-disciplinary leaps are thrilling, and mostly seamless, though there can be a lot of exposition in the dialogue. With the all-access passport granted by historical fiction, she even alights daringly, if perhaps a little superfluously, in the circle of Jackson Pollock, right before the artist died while driving drunk with his mistress ... But this is really a book about the power and pain of words, not pictures ... But this is really a book about the power and pain of words, not pictures ... Call it a prolonged case of post-Watership Down stress disorder, but most books with animal themes make me want to run like hell; chances are the creatures are going to suffer or die at the hands of abusers or predators. In Horse, though, Lexington is ennobled by art and science, and roars back from obscurity to achieve the high status of metaphor. It’s us human beings who continue to struggle.
Read Full Review >>
See All Reviews >>
SIMILAR BOOKS
Coming Soon

Night Wherever We Go
Tracey Rose Peyton
Positive
What did you think of Horse?
© LitHub | Privacy