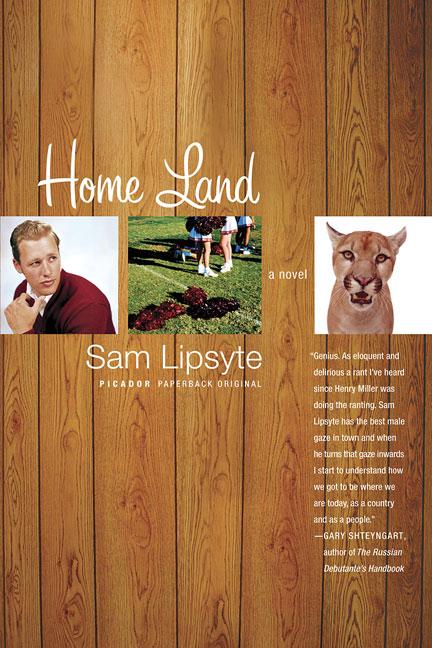 The Eastern Valley High School Alumni newsletter, Catamount Notes, is bursting with tales of success: former students include a bankable politician and a famous baseball star, not to mention a major-label recording artist. Then there is the appalling, yet utterly lovable, Lewis Miner, class of '89—a.k.a Teabag—who did not pan out. Home Land is his confession in all its bitter, lovelorn glory.

What The Reviewers Say
Rave Daniel Asa Rose,
New York Magazine
Slacker narrators have never been the most appealing literary subgroup ... Lewis 'Teabag' Miner, the wiggy epistolary narrator of Sam Lipsyte’s new novel, Home Land, is the exception who proves the rule—indeed, with any luck, he could be the one to retire it, and make aimless American middle-aged men respectable literary figures once more ... The upshot is that what seems at first to be yet another in a long line of contemporary self-pitying narrators turns out to be someone surprisingly fresh and angst-free ... Admittedly, some readers might find the novel’s humor a little too dark ... Still, for a pace this frantic, few of the fireworks are duds.
Read Full Review >>
Positive Lizzie Skurnick,
The New York Times
Written as a series of unembroidered letters Miner sends to Catamount Notes, Home Land is an energetic campaign against the art of the sunny update ... This novel...has an obvious forebear in Philip Roth's Portnoy's Complaint. Like Portnoy, Miner piles clausal filigree upon clausal filigree to create a baroque edifice of seething irony ... But Home Land is not simply an account of life at the bottom of the food chain. Miner is too interesting a loser -- in the face of his vast inconsequence, he remains unbowed ... As Lipsyte pointedly shows, Miner is less a loser than an avatar of failure, a high priest of defects. What he truly wants is to enlighten those of us who have yet to acknowledge our own flaws -- in other words, almost everybody.
Read Full Review >>
Positive Aida Edemariam,
The Guardian (UK)
Sam Lipsyte can really write. Sentence after sentence is clever, agile, amused; they torque away, at the last moment, from what you might expect. One-liners abound, often freighted with darkness and insight; Lipsyte is playful and lewd, bleak and farcical, walking a fine line between near-glib humour and a genuine existential fear one could even call Beckettian ... At the same time, he could not be more contemporary, more American ... Partly because it's all contained in the same town, enabling better development of fewer characters, partly because it's hung on a simple plot, Homeland is a lot more satisfying than The Subject Steve ... The passivity, the wallowing in alienation, becomes aggravating.
Read Full Review >>
See All Reviews >>
SIMILAR BOOKS
Coming Soon

The Last Karankawas
Kimberly Garza
Rave
What did you think of Home Land?
© LitHub | Privacy