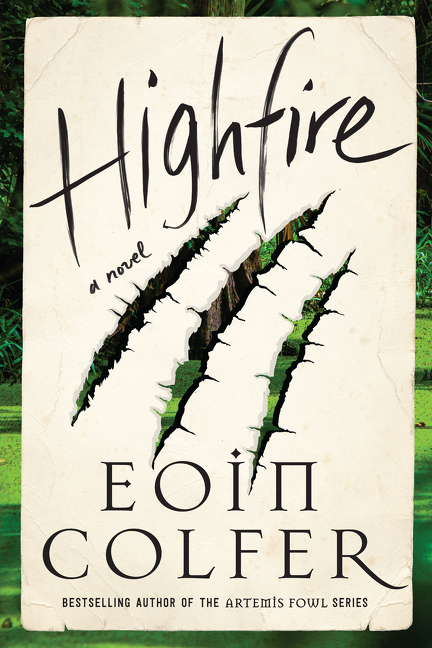 From the New York Times bestselling author of the Artemis Fowl series comes a hilarious and high-octane adult novel about a vodka-drinking, Flashdance-loving dragon who lives an isolated life in the bayous of Louisiana—and the raucous adventures that ensue when he crosses paths with a fifteen-year-old troublemaker on the run from a crooked sheriff.

What The Reviewers Say
Rave David Barnett,
The Guardian (UK)
in his first adult fantasy novel, Colfer takes on dragons. Highfire is a briskly entertaining outing centred on the curmudgeonly and slobbish Vern, last of the fire-breathing beasts of folklore ... Vern is closer to the size of a bear than a dinosaur, and the central plank of the book is his relationship with savvy local teenager Squib Moreau, who chances on the dragon’s lair. What could have been a fairly saccharine odd-couple, cross-generational confection, with Vern as the ultimate boomer to Squib’s Gen Z-er, becomes something more satisfying in Colfer’s deft hands ... While the humans who populate this grittily realised world are sometimes rather too quick to accept the existence of Vern, it’s probably necessary to keep the bouncy plot moving. With this satisfying and at times hugely joyous novel, Colfer is, like his engaging scaly protagonist, cooking on gas.
Read Full Review >>
Rave Dean Murphy,
Bookreporter
Thronged with dragon-sized metaphors, Peter Pan fans will adore the cheeky imagery and characters in this irreverent fantasy. Instead of Captain Hook, there’s Constable Hooke. Karma seems to be a character. Dastardly deeds come back to bite Hooke --- and not figuratively. This is Squib’s coming-of-age tale, the boy who does grow up. A huge high five to Highfire.
Read Full Review >>
Mixed Becky Long,
Irish Times (UK)
The question...seems to be, is there space for Colfer’s specific brand of Irish wit within this already crowded space? ... And the answer is yes. But that’s not exactly what we’re getting with Highfire. Primarily because it’s set in a swamp in Louisiana in southern United States. And while this gives Colfer a whole new palate of linguistic flair and colloquialisms to play with, it also, strangely, limits his traditionally expansive storytelling style ... It’s incredibly hard to write an original fantasy novel. And talking dragons are nothing new. But Colfer has managed to produce something fresh and infinitely readable here. Vern in particular is an incendiary joy; a cantankerous, lonely and existentially challenged dragon with a proverbial heart of gold – or fire. He resides happily at the core of a novel that never quite reaches its potential but has a hell of a lot of fun trying ... Colfer’s style is compelling, his language inventive, and, most importantly, his ideas are entertaining. I just want more. There’s no bigger picture here, and you can feel the lack ... Highfire is deliciously funny at times. In a sea of forgettable modern fantasy titles, it offers moments of genuine originality. It’s violent, but not quite violent enough. It’s witty but it’s not as razor sharp as some of Colfer’s best work. It’s ambitious but it could do better.
Read Full Review >>
See All Reviews >>
SIMILAR BOOKS
Fantasy

Piranesi
Susanna Clarke
Rave
What did you think of Highfire?
© LitHub | Privacy