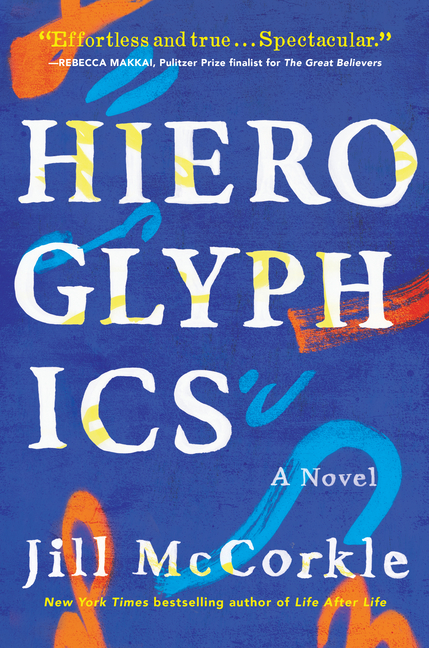 Lil and Frank married young, having bonded over how they both lost a parent when they were children. Over time, their marriage grew and strengthened, with each still wishing for so much more understanding of the parents they'd lost prematurely. Now, after many years in Boston, they have retired in North Carolina. There, Lil, determined to leave a history for their children, sifts through letters and notes and diary entries-perhaps revealing more secrets than Frank wants their children to know.

What The Reviewers Say
Rave Freya Sachs,
BookPage
It isn’t a mystery, yet in many ways, Jill McCorkle’s Hieroglyphics builds like one as characters appear, slowly reveal more of their pasts and secrets and eventually expose their connections and how the story fits together. Overlapping memories—of the things one tries to bury or make sense of—create layers of meaning for the characters and their children, whose voices compose the story with a range of experiences and perspectives. The prose is magnetic, drawing you in and holding your attention as questions slowly turn into answers ... As the parental figures struggle with their histories, choices and actions, it is through the lens of the children that these secrets find power and meaning. This echo, this sense of connectedness, of how we care for and hurt each other, gives the novel a clear resonance.
Read Full Review >>
Rave Sylvia Brownrigg,
The New York Times Book Review
In her vibrant, engaging fiction, Jill McCorkle has given voice to characters on both sides of the divide between professionals and the essential workers who sustain them ... McCorkle’s art lies in chronicling the many minor episodes that build one person’s unique life ... though Hieroglyphics is self-contained, it will be a richer story for readers already familiar with some of these characters ... The tone of Hieroglyphics is dreamier and more interior than that of McCorkle’s previous novel ... a generous, humane writer.
Read Full Review >>
Positive Lynne Hugo,
New York Journal of Books
... characteristic grace ... McCorkle is an insightful, skillful writer and these characters have led complex lives. She takes her time and lets them unpack their baggage slowly, a piece at a time. So when McCorkle suddenly speeds to and through the finish, with Jason—our least known character—making and revealing a major discovery, along with Lil’s revelations and what some may consider the quick end of the novel, is McCorkle suggesting that this is what happens with our lives? We think we’ll have time to make decisions, to work something out, but then, surprise! it’s over and we’re gone.
Read Full Review >>
See All Reviews >>
SIMILAR BOOKS
Fiction

The Many Daughters of Afong Moy
Jamie Ford
Mixed
Fiction

Elsewhere
Alexis Schaitkin
Rave
What did you think of Hieroglyphics?
© LitHub | Privacy