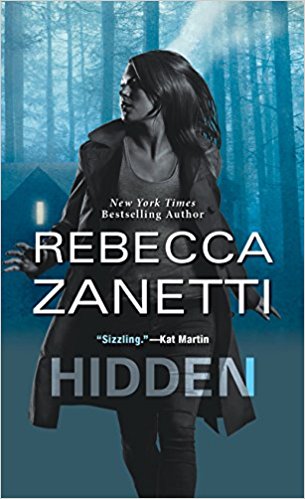 Hide. That's all Pippa can do to escape the terror chasing her. But now that she's off the grid in a safe house, she finds plenty of interesting things to watch through the window. Like her new neighbor, with his startling green eyes, killer smile, and sexy bad-boy tattoo.

What The Reviewers Say
Rave Christie Ridgway,
Bookpage
The suspense is chilling and the romance is hot in Rebecca Zanetti’s Hidden. Former undercover cop Malcolm West needs to recuperate from the mental and physical pain caused by his last assignment, so he moves to a small rural community where the most exciting part of his day is catching a glimpse of his shy, pretty neighbor Pippa. But almost immediately, a secretive government team recruits him to investigate a dangerous cult that the woman next door used to belong to ... The ticking-clock plot stretches the nerves, but Zanetti balances this with touches of humor—a dog in high heels!—and the burgeoning bond between lovers in her engrossing, entertaining read.
Read Full Review >>
Rave Harley Quin Junkie
Malcolm West barely survived a tough undercover assignment. Luckily, he’s finally free and ready to start his life fresh again. However, when he moves into his new place, he soon discovers he hasn’t escaped his life as a cop when someone comes to recruit him for a new team with his first assignment being to get close to his next door neighbor, Pippa ... this new series by Ms. Zanetti starts off superbly with wonderful main...and secondary characters, compelling and intense dialogue that had me reading quickly.
Read Full Review >>
Rave Publishers Weekly
Zanetti’s...romantic thriller explodes with action, spice, and humor. Pippa Smith is in hiding, borderline agoraphobic, forever looking over her shoulder, and ducking away from security cameras after escaping life in a cult just before her 18th birthday. Isaac, the cult’s leader, is still searching for her seven years later. Malcolm West, her new next door neighbor in Cottage Grove, is a former undercover detective with PTSD from an op gone badly. Little do they know, their meeting is orchestrated by Angus Force, a former FBI profiler and head of a brand new branch of the Homeland Defense Department ... developed characters pair well with a...suspenseful story to create just enough tension to capture readers without being overwhelming.
Read Full Review >>
See All Reviews >>
SIMILAR BOOKS
Fiction

Untouchable
Jayne Ann Krentz
Positive
What did you think of Hidden?
© LitHub | Privacy