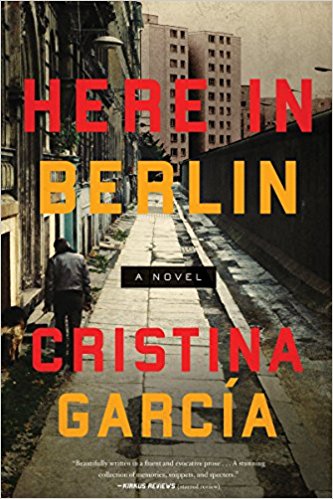 A lonely, nameless Visitor spends several months in Berlin during 2013, absorbing the stories of dozens of people whose lives have been shaped, or twisted out of shape, by the Second World War and its aftermath.

What The Reviewers Say
Rave Michael Valinsky,
The Los Angeles Review of Books
This dispersal of identities is what gives the book its strength. In thematizing the readerly experience as a city anyone can enter, García creates a space for the reader to inject her own history into the book’s various narratives, and she makes this possible by offering stories from World War II to the contemporary era, successfully depicting the condition of living in the city of Berlin as time passes by ... The self-awareness that García gives her characters allows the text as a whole to function somehow autonomously. Without an identified narrator, the text appears expansively and virtuously unauthored — the product of a cast of characters that shape and define the social topography of the city, recoded as narrative ... Overall, Here in Berlin is an impeccable linguistic exercise in narratology and a brilliant exploration of the various identities we adhere to in metropolitan environments. García successfully rehumanizes a German postwar trauma of a populace that for so long coped with the making anonymous of people through genocide, the deadening speed of its capitalist structures, and the oppressive world of East Berlin.
Read Full Review >>
Rave Anthony Domestico,
The San Francisco Chronicle
Here in Berlin is less a novel than an exhilarating orchestration of competing voices and temporalities ... Here in Berlin is a marvelous palimpsest. Voices refract back on one another, each moment containing other, earlier moments within it ... From the wrestling with German memory to the strangely passive narrator, there’s an obvious literary ghost haunting Here in Berlin as well: W.G. Sebald. García happily admits the influence in her acknowledgments, and, in a tip of the cap, makes the Sebaldian decision to intersperse her text with ghostly photographs. But García’s prose is less melancholic than Sebald’s, her stance more optimistic.
Read Full Review >>
Rave Wendy Lesser,
The New York Times Book Review
But it strikes me that Cristina García’s Here in Berlin is one of the most interesting new works of fiction I’ve read ... It’s billed as a novel, but there are few (if any) novels that take a similar form. In 35 separate monologues, plus five italicized sections describing the unnamed Visitor who elicits these interview statements, García presents a portrait of the city that is at once true and imaginary ... The voices are remarkably distinct, and even their linguistic mannerisms — with interpolations of bits of German, multiple ways of rendering or evading the facts and direct addresses to someone...yet this more ambitious novel, in which she transcends her own life story to tread delicately on the turf staked out by Christa Wolf and W. G. Sebald... This novel, in any case, bears none of the obvious trappings of commercial success. It is not suspense-filled. It is not heartwarming. It is simply very, very good.
Read Full Review >>
See All Reviews >>
SIMILAR BOOKS
Fiction

Mona at Sea
Elizabeth Gonzalez James
Positive
What did you think of Here in Berlin?
© LitHub | Privacy