Her Heart for a Compass 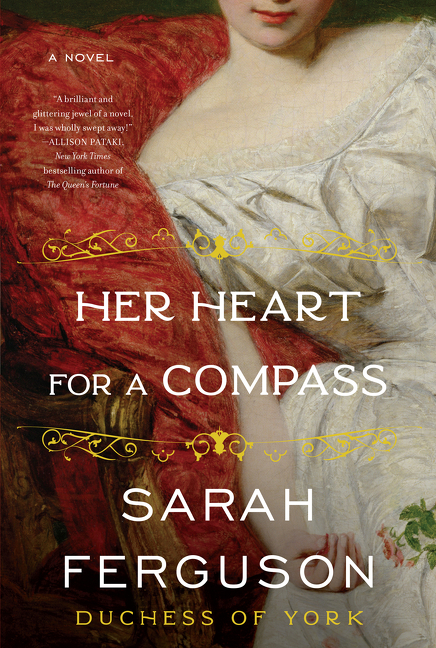 The Duchess of York and former wife of Britain's Prince Andrew has penned her first adult novel, featuring a fictionalized version of Victorian England's Lady Margaret Montagu Scott. Expected to make an advantageous marriage, Lady Margaret rebels shortly before her betrothal is announced and flees, throwing herself into charitable work and befriending a group of similarly-minded, independent women.

What The Reviewers Say
Positive Jennifer McClellan,
USA Today
Ferguson’s strategy of pulling from her own experiences makes for an intriguing coming-of-age story fans of historical drama are sure to enjoy. Co-authored with Marguerite Kaye, the novel draws from extensive research to paint a rich, believable picture of 19th-century life as Margaret finds herself in England, Scotland, Ireland and America ... Our one qualm, if you can call it that, is the novel’s billing as a historical romance. If we’re talking the Shakespearean notion of romance, where all’s well in the end, then sure, this is a romance. But readers expecting Bridgerton levels of sexual tension will be disappointed. Indeed, the man Margaret ends up with graces just a handful of the novel’s more than 500 pages. Key moments in their love story— falling for each other, loss and reconciliation—are over too quickly and without the gut-wrenching scenes you’d expect from a romance novel. Yet, we say this as a clarification rather than a knock: Margaret’s story of courage and self-discovery stands strong on its own. Just like she does.
Read Full Review >>
Mixed Alison Flood,
The Guardian (UK)
... readers hoping for the sexy shenanigans usually found in the publisher’s output will be disappointed. While Margaret indulges in a handful of kisses, and at one point has a man 'adjusting his kilt, swearing under his breath', the pleasures she experiences are all very much above the waistline ... Bridgerton this is not. Instead, running to 500-plus pages, Her Heart for a Compass sees Margaret realising that she doesn’t need to 'conform to the rules set down by society' ... The novel veers around somewhat in tone, from archaic...to the entirely contemporary ... Compass is nonetheless well-researched, and a glimpse into the strictures of life as a pampered, rich, upper-class woman. It wears its research lightly, with intriguing forays into topics such as Victorian bathing dresses, and the Queen’s predilection to 'pour her tea from one cup to another until it was adequately cooled'.
Read Full Review >>
Pan Melanie McDonagh,
Evening Standard (UK)
It’s tosh, of course, but amiable tosh. Yet what’s baffling is that for someone who presumably knows her way around the aristocracy, our author sounds so very much like an outsider with her nose pressed against the glass, who doesn’t know how grandees actually talk but tries to make up for it by the lavish use of titles and refined diction; there’s a pinkie held aloft in every sentence. The language is a kind of parody of genteel Victorian when it’s not weirdly contemporary—Lady Margaret never puts on clothes when she can don attire and her friends are never helpful so much as inordinately accommodating - and absolutely none of it reads as if it’s written by someone who knows actual dukes to the point of being formerly married to one. Actually if you bear in mind that Her Heart for a Compass is published for Mills and Boon, you could say it’s a perfect example of the genre.
Read Full Review >>
See All Reviews >>
SIMILAR BOOKS
Fiction

This Other Eden
Paul Harding
Rave
What did you think of Her Heart for a Compass?
© LitHub | Privacy