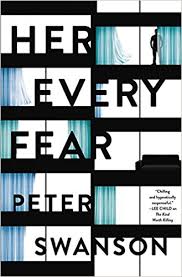 Still traumatized by a boyfriend-turned-stalker, an English woman swaps apartments with her cousin in Boston. Soon a series of suspicious happenings are uncovered after the discovery of her next-door neighbor's murder.

What The Reviewers Say
Positive The Wall Street Journal
Kate Priddy, the young woman at the center of Peter Swanson’s thriller Her Every Fear, is prone to panic attacks... More than slightly reckless, though, is her growing interest in the very recent murder of a woman who lived in the same apartment building that Kate’s moved into ... Mr. Swanson, the author of two earlier well-regarded suspense novels, tells this complex and often horrific story from several characters’ points of view, often through flashbacks spanning several years’ events in London and Boston ...reminiscent of a folie à deux out of Patricia Highsmith or Fuminori Nakamura ...the author proves to be at least a bit more merciful than his monstrous villain.
Read Full Review >>
Positive Jeff Ayers,
The Washington Times
Peter Swanson tells an engaging story of a woman battling severe anxiety who decides to radically change her life –– and the horrifying results that follow –– in Her Every Fear ... When the novel focuses on Kate, the writing and story line shine. Swanson made the decision to give other points of view, including the cousin and Alan, and their narratives lag a bit ...a sole focus on Kate’s perspective would have made it a classic. Either way, Swanson has crafted an effective and compulsive thriller.
Read Full Review >>
Rave Chris Beakey,
The New York Journal of Books
...be in for a big surprise, however, as they turn the pages of the upcoming Her Every Fear, a woman-in-jeopardy story in which the bad people are men ...revel at Swanson’s ability to create charismatic villains who spark fear by the evilness of their deeds and because they look like people we see every day ...these scenes between Corbin and Henry where Swanson’s strengths as a craftsman of evil truly shine ...a very different kind of book, more reminiscent of Daphne du Maurier’s gothic storytelling than the stiletto-sharp prose that’s led readers and critics to compare Swanson to James Cain.
Read Full Review >>
See All Reviews >>
SIMILAR BOOKS
Coming Soon

On Java Road
Lawrence Osborne
Rave
What did you think of Her Every Fear?
© LitHub | Privacy