Her Body and Other Parties 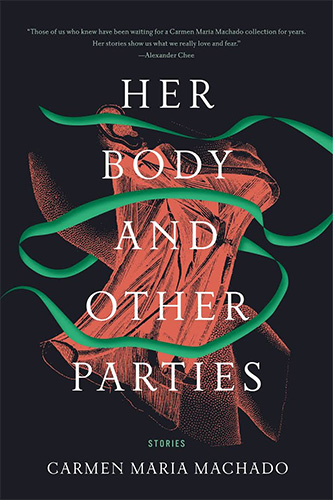 What The Reviewers Say
Rave Parul Sehgal,
The New York Times
Her Body and Other Parties, by Carmen Maria Machado, is a love letter to an obstinate genre that won’t be gentrified. It’s a wild thing, this book, covered in sequins and scales, blazing with the influence of fabulists from Angela Carter to Kelly Link and Helen Oyeyemi, and borrowing from science fiction, queer theory and horror ... Machado is fluent in the vocabulary of fairy tales—her stories are full of foxes, foundlings, nooses and gowns—but she remixes it to her own ends. Her fiction is both matter-of-factly and gorgeously queer. She writes about loving and living with women and men with such heat and specificity that it feels revelatory ... But if Machado is strong on pleasure, she’s better on despair, on our rage at our bodies—for their ugliness and unruliness, their excess and inadequacy and, worst of all, their temerity to abandon us altogether ... We see what her characters cannot—that some of the scariest monsters come from within. And learning to identify what to fear, and to fear the right things, can be a kind of power.
Read Full Review >>
Rave Laura Collins-Hughes,
The Boston Globe
Written in prose so textured that you want to rub her phrases between your fingertips ... A muscular strain of feminism runs through this book, whose contemplation of the female body is bound up in sex, power, pleasure, pain, and the fitful struggle against self-loathing. Rarely is a writer as skilled as Machado at evoking corporeality: the myriad sensations of inhabiting flesh and bone, with all its messiness and ecstasies. Sex plays a major part in these stories, and she excels at potent depictions that sidestep the ick factor so many authors find difficult to avoid ... This is what she does best, and she does it again and again in this collection: blend disparate, jostling elements to achieve a ferocious alchemy.
Read Full Review >>
Rave Ellie Robins,
The Los Angeles Times
The collection is that hallowed thing: an example of almost preposterous talent that also encapsulates something vital but previously diffuse about the moment...This is bodily fiction, written for and within a culture that’s rediscovering the body: through today’s feminism, with its new frankness about women’s bodies (as when legions of women called Mike Pence to tell him about their periods) and through the broader cultural shift toward valuing the experience of the body in the moment ... In Machado’s stories, reclaiming the female body doesn’t mean ignoring the damage so often done to it but rather subverting the narrative that allows this damage to define the body ... Machado is a master of such pointed formal play, of queering genre and the supposed laws of reality to present alternative possibilities ... Machado reveals just how original, subversive, proud and joyful it can be to write from deep in the gut, even — especially — if the gut has been bruised.
Read Full Review >>
See All Reviews >>
What did you think of Her Body and Other Parties?
© LitHub | Privacy