Heirs of the Founders: The Epic Rivalry of Henry Clay, John Calhoun and Daniel Webster, the Second Generation of American Giants 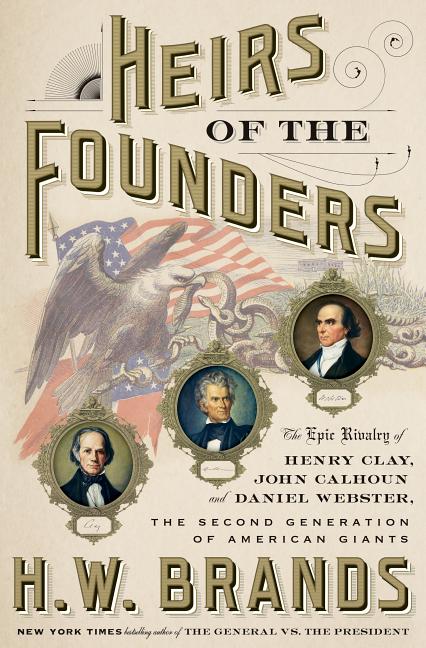 From New York Times bestselling historian H. W. Brands comes the story of how, in nineteenth-century America, a new set of political giants battled to complete the unfinished work of the Founding Fathers and decide the future of our democracy.

What The Reviewers Say
Positive Marjoleine Kars,
The Washington Post
It is [the subjects'] words, as much as their actions, that take pride of place in the book, as Brands vividly re-creates the delivery of their speeches (complete with cheers, shouts and pregnant silences) and quotes extensively from their essays and letters ... In a fast-paced narrative with snappy short chapters, Brands, the author of 30 books on American history, recounts the three men’s thinking and scheming as they rode the ups and downs of antebellum politics ... Despite Brands’s unease with the genre, then, one might wonder whether this engaging political biography inadvertently expands Founders Chic.
Read Full Review >>
Positive Harold Holzer,
The Wall Street Journal
In the lively and learned joint biography Heirs of the Founders, H.W. Brands does his best to squeeze drama from the period between America’s epochal struggles ... Mr. Brands has produced a narrative that pulsates vigorously, sometimes even over-heatedly ... Mr. Brands memorably sketches the personality of each titan over time ... Mr. Brands handles the apogee of each of his key characters with flair.
Read Full Review >>
Mixed Glenn C. Altschuler,
The Star Tribune
Brands does not challenge current interpretations of American politics in the first half of the 19th century or the roles played by his protagonists. A gifted storyteller, he provides a traditional narrative that sets the context and then, in no small measure, allows them to speak for themselves ... That said, Brands does not adequately address a fundamental question about oratory.
Read Full Review >>
See All Reviews >>
What did you think of Heirs of the Founders: The Epic Rivalry of Henry Clay, John Calhoun and Daniel Webster, the Second Generation of American Giants?
© LitHub | Privacy