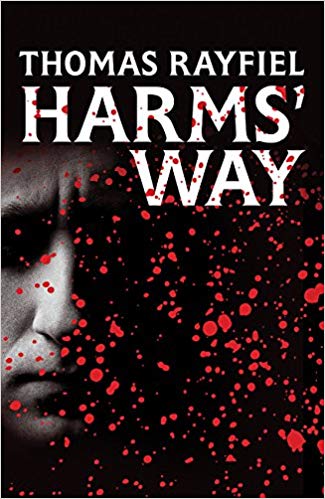 Examining a super-max detention facility where America's most psychotic killers are kept in solitary confinement, Harms' Way, is a novel that poses questions about our fundamental qualities as moral beings, about the inherent vices and virtues of our much-vaunted "humanity."

What The Reviewers Say
Rave David Pitt,
Booklist
Over time we come to understand that Ethan is an unreliable narrator—not only isn’t he telling us much, but what he does tell us can’t be trusted. This technique works on multiple levels: it draws us in, creating a powerful thirst to know more about Ethan, and it generates considerable tension (we know what we learn won’t be good). Harms’ Way... is ingenious in its construction, gut-punching in its final moments.
Read Full Review >>
Mixed Toni V. Sweeney,
New York Journal of Books
Harms’ Way is a chilling journey through a killer’s mind, presented as a near stream-of-consciousness narration so that the segues from one subject to another occur in such a way it’s sometimes difficult to differentiate the real from the unreal, what is actually happening, from Harms’ ruminations and recollections ... Readers will no doubt feel a surprising sympathy for the characters in this story, then remind themselves of the crimes committed and have an immediate reversal of opinion. Some may question whether the isolation into which these men are placed makes them worse as it causes their thoughts to fester in minds blank with boredom, to keep returning to the one thing they’re certain of: their crimes. Nevertheless, the emotion evoked by this story will remain tucked away in the heart, in the form of dismaying pity, that, through heredity, environment, or both, the minds of some individuals can make them so cruelly inclined to their fellow beings.
Read Full Review >>
Positive Ellen Akins,
Minneapolis Star Tribune
Prepare to be appalled — by Thomas Rayfiel; Ethan Harms, his creation; or yourself, for falling for him ... It is tempting to read the entire novel as an extended metaphor — a temptation that Ethan encourages... And yet, he is no more capable of transcending the flesh and desires that define him than is Shakespeare’s Richard II ... What a reader has to come to terms with in this novel is how much of humanity Ethan Harms represents. Are we to align ourselves with the flesh and desires of his familiar prison — or can we cling to the fiction that the prison is all of his own making, his alone, his manatee?
Read Full Review >>
See All Reviews >>
SIMILAR BOOKS
Fiction

Find You First
Linwood Barclay
Positive
What did you think of Harms' Way?
© LitHub | Privacy