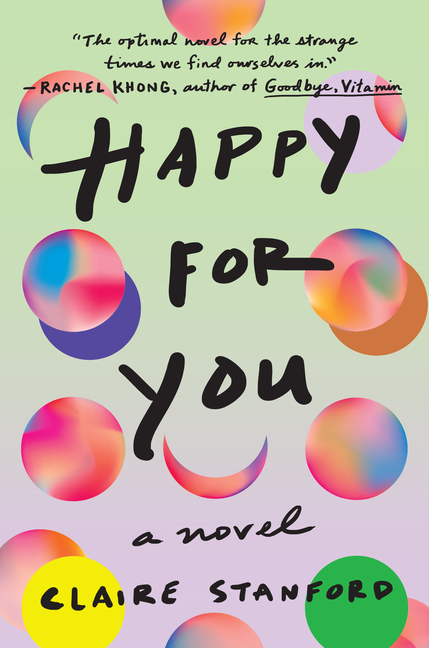 Four years into writing her still-unfinished philosophy dissertation, and anticipating a marriage proposal from her long-term boyfriend, Evelyn Kominsky Kumamoto is wrestling with big questions about life: How can she do meaningful work in the world? Is she ready for marriage—and motherhood? But no one else around her seems to share her ambivalence. Swallowing her doubts, Evelyn makes a leap, leaving academia for a job as a researcher at the third-most popular internet company, where her team is tasked with developing an app that will help users quantify and augment their happiness. Confronting Silicon Valley's norm-reinforcing algorithms and predominantly white culture, she struggles to find belonging.

What The Reviewers Say
Positive Alexandra Chang,
New York Times Book Review
Engrossing and clever ... Stanford captures the allure, absurdity and menace of corporate spaces with wit and levity ... Evelyn's grief for her mother is a steady undercurrent throughout the book, and some of the more moving moments of the story come from Evelyn’s reflections on loss ... Just as we’re about to give up on this drifting character’s chance at happiness, the third act of the book delivers emotional resolve and warmth ... Stanford occasionally relies too heavily on motif to relay meaning...and on contrived scenes to stand in for character development. At times one wishes for more of Evelyn’s interiority, her philosophical analysis of and perspective on her various circumstances. But these fleeting moments do not take away from the book’s overall precision — the unvarnished prose, the astute observation. Stanford rewards the reader with many thought-provoking and eerie moments ... Anyone who has resisted fitting neatly into an algorithm will find a companion in Evelyn, and in this book.
Read Full Review >>
Positive Publishers Weekly
A resonant meditation on what it means to be happy in an increasingly tech-saturated world ... At turns thoughtful, funny, and startling, Stanford’s writing perfectly captures her protagonist’s aimlessness.
Read Full Review >>
Positive Kirkus
Evelyn’s constant ambivalence about every aspect of her life is frustrating, and she can feel like a muted and flat protagonist. She possesses an acute awareness of racial dynamics, though, and the myriad ways her biracial identity causes friction throughout the novel provide moments of wit and insight. An emotional twist in the later chapters ups the stakes and gives the reader a reason to stay engaged ... A rumination on modern happiness that rewards patient readers in the end.
Read Full Review >>
See All Reviews >>
SIMILAR BOOKS
Coming Soon

Fellowship Point
Alice Elliott Dark
Rave
What did you think of Happy for You?
© LitHub | Privacy