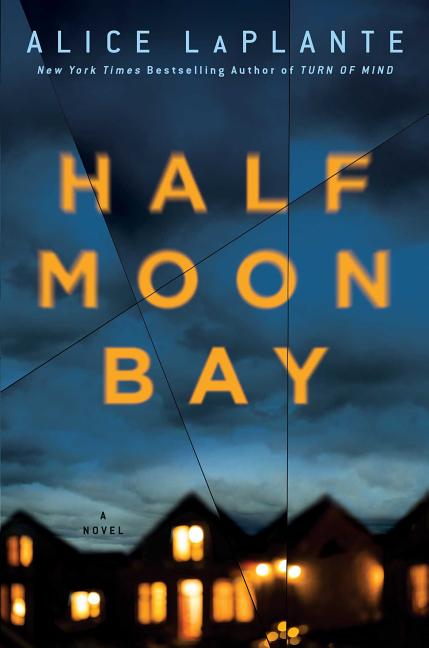 Jane loses everything when her teenage daughter is killed in a senseless accident. Wanting to start a new life, Jane moves to Half Moon Bay. And then children begin to disappear.

What The Reviewers Say
Positive Gerald Bartell,
San Francisco Chronicle
...[an] eerie, tense and finely written novel ... LaPlante fuses two themes in Half Moon Bay, the mystery of the missing children and the misery of Jane’s attempt to survive her losses. The latter strand works far more effectively than the former ... And though LaPlante knows how to ramp up suspense (particularly at the end, where it counts), some scenes (Jane’s encounters with a hunky surfer co-worker, for example) are pretty obviously red herrings ... Jane’s story is by far the more meaningful, resonant and humane aspect of Half Moon Bay.
Read Full Review >>
Positive Megan Elliott,
20SomethingReads
LaPlante’s book is an engrossing character study disguised as a mystery. The details of the abductions and murders are sketchy, with just enough information provided to make them appropriately unsettling ... Far more time is spent exploring Jane’s internal world, and LaPlante deftly deploys small details that reveal her protagonist’s state of mind ... The novel is also a close look at the terrors of motherhood ... It’s the promise of a juicy murder mystery that will draw readers into this world ... But it’s LaPlante’s emotionally resonant portrait of a broken woman struggling to find meaning in her radically altered life that will keep them turning the pages.
Read Full Review >>
Mixed Don Crinklaw,
Booklist
...this is an attempt to fuse a literary novel with a crime thriller and—also like the earlier novel—its success depends upon reader reaction to the blending of the two approaches ... the novel gets lost in a sea of introspection ... There is fine, thoughtful prose here, but it is never entirely in sync with the action around it.
Read Full Review >>
See All Reviews >>
SIMILAR BOOKS
Fiction

Dirt Creek
Hayley Scrivenor
Rave
What did you think of Half Moon Bay?
© LitHub | Privacy