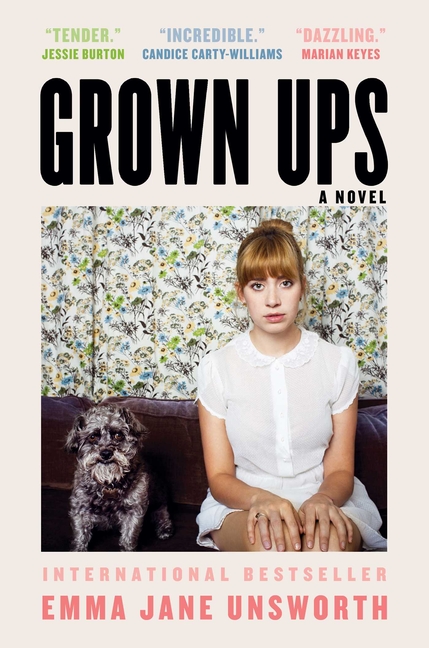 Jenny McLaine’s life is falling apart. Her friendships are flagging. Her body has failed her. She’s just lost her column at The Foof because she isn’t the fierce voice new feminism needs. Her ex has gotten together with another woman. And worst of all: Jenny’s mother is about to move in. Having left home at eighteen to remake herself as a self-sufficient millennial, Jenny is now in her thirties and nothing is as she thought it would be.

What The Reviewers Say
Rave Hephzibah Anderson,
The Observer (UK)
Emma Jane Unsworth’s virtuoso new novel is far too canny to convey anything so gauche as a 'message', but if it did, it would be this: step away from your screen ... Adults is a tale rich in keenly observed relationships – between mothers and daughters, best friends and boyfriends, idols and rivals – yet its central, inseparable pairing is that of thirtysomething heroine Jenny and her phone. Theirs is a supremely dysfunctional affair ... Daffy one-liners, trenchant satire, misadventure of the laugh/cry variety – the narrative pops with all of the above as it parses everything from selfhood to attraction ... Though she’s a dauntingly able all-rounder ... it’s as a comedic writer that Unsworth sparkles, and her quickfire wit synthesises perfectly with her theme in Adults, mimicking the relentless pace of the internet. Yet like the very best of her kind, she creates a world complex enough that in the echoes of our laughter are also relatability, wistfulness, even hope. All are present in this novel’s satisfying close.
Read Full Review >>
Rave Kelly Conaboy,
The New York Times Book Review
Emma Jane Unsworth’s new novel, Grown Ups, grants you precisely that voyeuristic look into the hideous unseen machinations behind the posts. And it is deeply unsettling ... Although it’s a comedic novel — and a truly funny one — it’s less of an escape than it is a set of Clockwork Orange metal eye clamps, forcing you to examine, in paragraphs and paragraphs of hand-wringing over exclamation points and emoji choices and the exact right timing of a fav, your own profoundlyunhealthy relationship with social media ... Grown Ups succeeds in not just accurately portraying this modern obsession, but in tenderly revealing what might be driving it.
Read Full Review >>
Positive Anna Mundow,
The Wall Street Journal
The reader, too, may find Jenny’s online insecurities barely credible given her age. But her voice is so immediately engaging—and her perspective so zanily acute—that we overlook any incongruities ... But this oddly charming narrative is far more than a feast of one-liners. Ms. Unsworth’s satirical eye is more keenly focused here than in her previous two novels ... self-inflating targets such as mindfulness, artiness and new-manliness are sparingly deployed and exquisitely punctured while the overall mood is subtly textured and the central plot almost quaintly plain ... The novel’s deeper charm resides in its fleeting evocations of the past and of England’s flintier regions, sketches that in their deftness recall Alan Bennett’s portraits of his northern English birthplace ... in this sprightly novel introspection has met its match.
Read Full Review >>
See All Reviews >>
SIMILAR BOOKS
Coming Soon