Grief Is the Thing with Feathers 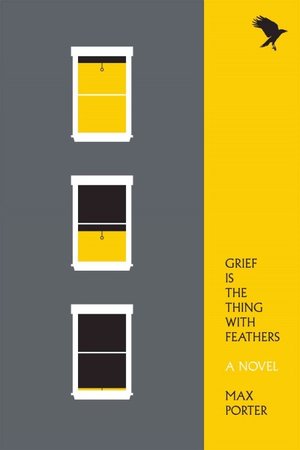 Part novella, part polyphonic fable, part essay on grief, Grief is the Thing With Feathers focuses on a poetry scholar, adrift after his wife's sudden death, who, together with his two sons, is visited by a crow that acts as an aide to their emotional recovery.

What The Reviewers Say
Rave Kirsty Gunn,
The Guardian
Grief Is the Thing With Feathers is the most exquisite little flight of a story captured between hardback covers, and its appearance has been crafted to show us that we are in for something unusual. This deeply moving book about death and its grief-stricken consolations – love and art – appears to be no more than a scattering of text, dialogue and poetry that lifts and settles on the page, the frailest sort of thing. Yet as we read on, we become aware that the way it has been put together is robust indeed ... Risking the rigours of its intellectual and aesthetic endeavour through extreme compression, Porter’s story becomes a profound meditation on the difficulty of writing about love and loss.
Read Full Review >>
Rave Katie Kitamura,
The New York Times Book Review
Although charged throughout with high emotion, the novel is rarely sentimental. Porter resists the static register of the maudlin, creating instead a fabric of constant shifts and calibrations in voice, moving from rage to madness to profanity and humor. He has an excellent ear for the flexibility of language and tone, juxtaposing colloquialisms against poetic images and metaphors. The result is a book that has the living, breathing quality of the title’s 'thing with feathers.'”
Read Full Review >>
Rave Heller McAlpin,
NPR
As resonant, elliptical and distilled as a poem, Grief Is the Thing With Feathers is one of the most moving, wildly inventive first novels you're likely to encounter this year. It's funny — in a jet-black way — yet also fiercely emotional, capturing the painful sucker-punch of loss with a fresh immediacy that rivals Joan Didion's The Year of Magical Thinking ... Porter's unusual novel puts grief in its place not by dismissing it, but by confronting it dead-on as a painful but inescapable part of life. Grief is the Thing With Feathers is a wondrous, supremely literary, ultimately hopeful little book.
Read Full Review >>
See All Reviews >>
SIMILAR BOOKS
Fantasy

The Seven Moons of Maali Almeida
Shehan Karunatilaka
Positive
What did you think of Grief Is the Thing with Feathers?
© LitHub | Privacy