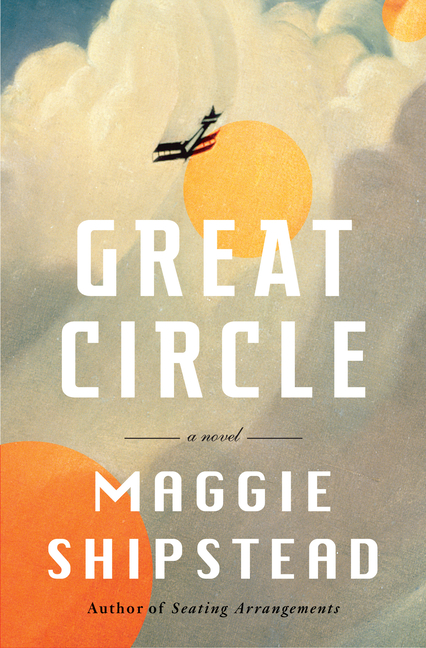 After being rescued as infants from a sinking ocean liner in 1914, Marian and Jamie Graves are raised by their dissolute uncle in Missoula, Montana. There—after encountering a pair of barnstorming pilots passing through town in beat-up biplanes—Marian commences her lifelong love affair with flight. Eventually, she circumnavigates the globe by flying over the North and South Poles. A century later, Hadley Baxter is cast to play Marian in a film that centers on Marian's disappearance in Antarctica.

What is this?
Rave
Based on 23 reviews

What The Reviewers Say
Rave Lynn Steger Strong,
The New York Times Book Review
The start of Shipstead’s book [...] is thrilling and complicated, with many different threads laid out and back stories carefully and richly wrought; for the next 500-odd pages, I felt the fear I feel when a student’s work starts strong, when other novels open high — knowing that, more often than not, lofty heights can’t be sustained. But Great Circle starts high and maintains altitude. One might say it soars ... Great Circle can sometimes feel a bit baggy, but that seems to be Shipstead’s intention. This is a book explicitly invested in sweep ... this far-ranging breadth is as much the project of this novel as any of these individual lives — including all the ways each life exists within the context of so many others, the way the natural world informs and forms us, all the ways we are still only and particularly ourselves ... Great Circle grasps for and ultimately reaches something extraordinary ... In that, Great Circle is consistently, often breathtakingly, sound.
Read Full Review >>
Rave Ron Charles,
The Washington Post
... another surprising act of reinvention: a soaring work of historical fiction about a 'lady pilot' in the mid-20th century. Indeed, so convincingly does Shipstead stitch her fictional heroine into the daring flight paths of early aviators that you’ll be convinced that you remember the tragic day her plane disappeared ... Shipstead creates this catastrophe in all its watery terror, but what’s even more impressive is the way she sets up these characters so that we feel the full weight of the fears and passions pulling on them as the boat burns and sinks. Although we’ll never see some of these people again, the author’s careful investment in them sets down a thicket of secrets and obligations that will play out over the coming decades ... a relentlessly exciting story about a woman maneuvering her way between tradition and prejudice to get what she wants. It’s also a culturally rich story that takes full advantage of its extended length to explore the changing landscape of the 20th century ... A novel that switches between two different periods and tones confronts the essential challenge of rendering both competing story lines engaging, and Great Circle struggles to make that case. Hollywood, with all its hypocrisy and excess, may be a fat target, but it’s also a tattered one, and Shipstead has far more success bringing 1914 to life than 2014. The extraordinary realism of Marian’s chapters can make the broad strokes of Hadley’s sections feel light in comparison ... But fortunately, when Hadley gets serious about discovering the real story of Marian, the novel’s parallel stories begin to resonate with each other in interesting ways. Though separated by decades, the aviator and the actress are both powerful women, rising from devastating tragedies to forge their own way ... Whether you’re planning a trip or settling in for a staycation, Great Circle is my top recommendation for this summer.
Read Full Review >>
Rave Stuart Miller,
The Boston Globe
With Great Circle, it’s time to rewrite the book on Maggie Shipstead. Her writing still soars and dips with dizzying flair, but this time the dazzling prose is in the service of an expansive story that covers more than a century and seems to encapsulate the whole wide world. With detailed brilliance, she lavishes heart and empathy on every character (save one villain), no matter how small their role ... Shipstead’s prose is savory ... Even as Shipstead constructs her great circle she doesn’t hesitate to veer off course. There are close to 20 characters who are either fully fleshed out or at least sketched in with enough vibrancy that if you met one of them at a dinner party you’d feel like you’ve known them socially for years ... You’ll gladly follow the story as it turns and banks, trusting Shipstead to steer you back on course, weaving all the characters and ideas together as Marian, Jamie, and Caleb travel through the Depression, World War II, and beyond ... Even when the book loses some altitude during the war years, it always rights itself, its narrative momentum propelling you forward. Many authors attempting to create an epic falter at the end, losing control of the characters or the story, but Shipstead never wavers, pulls out a twist or two that feel fully earned, and then sticks the landing. After more than a year of a pandemic that grounded us all, Great Circle could not have arrived at a better time.
Read Full Review >>
See All Reviews >>
SIMILAR BOOKS
Coming Soon

Night Wherever We Go
Tracey Rose Peyton
Positive
What did you think of Great Circle?
© LitHub | Privacy