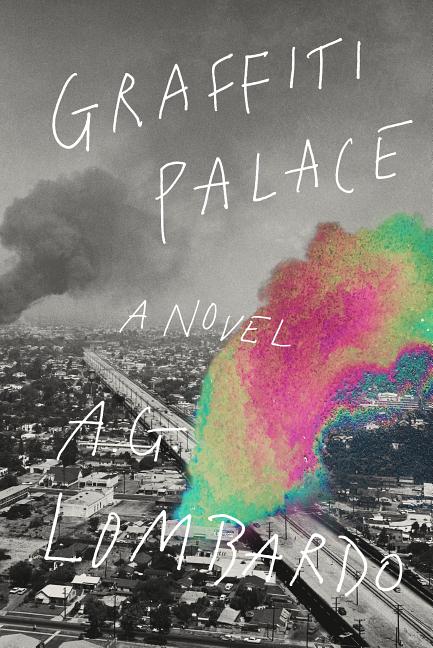 Inspired by Homer's The Odyssey, this debut novel narrates a young man's difficult journey home to his lover during the outbreak of the 1965 Watts rebellion in Los Angeles.

What The Reviewers Say
Rave Pierce Smith,
The Chicago Review of Books
Graffiti Palace is stunning — a blend of Joe Ide‘s IQ detective novels, Thomas Pynchon, Jonathan Lethem’s Chronic City, and Haruki Murakami’s 1Q84. Like Pynchon, Lombardo is particularly adept at creating that eerie, hackles-raising feeling when something normal morphs into something absurd, like a mutant strain of albino marijuana spreading through the L.A. sewers ... by revisiting the Watts Riots — a landmark moment that most Americans have already forgotten — Lombardo reminds us that like the Trojans and the Achaeans, we are doomed to repeat past bloodshed unless that reckoning continues.
Read Full Review >>
Positive John Flynn-York,
The Los Angeles Review of Books
Monk’s travels are picaresque, zig-zagging through southern Los Angeles and throwing him into the company of gang members and cops, musicians and exterminators, seers and novitiates, artists and radicals. He traces a tricky line: he’s neither wholly black nor wholly white...'a walking Rorschach mirror that perhaps reflects more of the beholder than the subject,' as Lombardo puts it ... it is improbably resilient, deriving narrative energy from the series of trials Monk undergoes, many of which have clear links to Homer’s epic: lotus-eaters in Chinatown, a cyclops in the tunnels under Los Angeles, a fortune teller near the Harbor Freeway. These connections work best when they’re dense and layered, operating as conversations and arguments with the source; when they’re on the surface, or treated as jokes, they’re less effective, pinging the reader with the thrill of noticing them without doing the harder work of expanding the range of Homeric tropes ... Lombardo’s style is a heightened one: it’s noticeable, draws attention to itself, revels in synonyms, metaphors, and exaggeration ... It is...refreshing to encounter a writer going against that minimalist grain ... Ultimately, Graffiti Palace itself is a performative resistance to authority, channeling the multiple contrasting voices and stories of Los Angeles into a mural exploding with color and contradictions.
Read Full Review >>
Positive Donna Seaman,
Booklist
Despite some forced notes, Lombardo has created an exuberantly cartoonish, incisive, and suspenseful tale of an erupting city and an earnest 'street scholar' intent on making us 'see the writing on the walls.'
Read Full Review >>
See All Reviews >>
SIMILAR BOOKS
Fiction