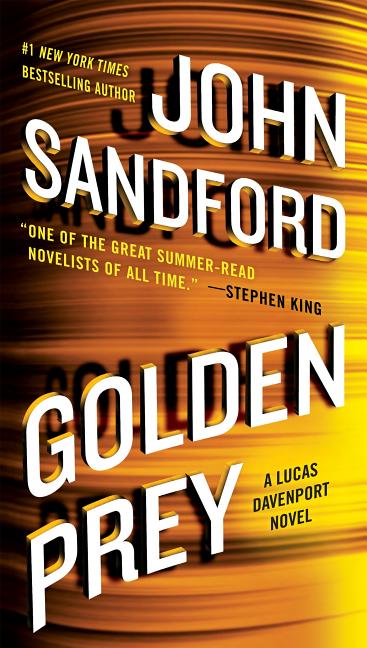 Lucas Davenport's first case as a U.S. marshal takes him into unexplored territory in this thrilling novel in the #1 New York Times-bestselling Prey series.

What The Reviewers Say
Positive Bo Petersen,
The Post and Courier
...snapping pace ... The whole trip comes to a brakes-to-the-floor screeching stop with one sly little twisting slide that will leave you — believe it or not — grinning. Climb on in.
Read Full Review >>
Positive The Real Book Spy
...a fresh new chapter to Sandford’s series, which now feels as though it could continue on forever ... Sandford uses quick pacing and sharp dialogue to keep the plot moving ... With Golden Prey, John Sandford successfully breathes new life into his most famous series
Read Full Review >>
Pan Jeff Strickler,
Minneapolis Star Tribune
Taking a mere six pages to set the scene and introduce the players, Sandford kicks the story into motion ... Sandford’s characterization of Davenport becomes increasingly cursory in each progressive book. His effort here doesn’t even qualify as one-dimensional; it’s more like two-thirds of a dimension ... when you’re on book No. 27, it can be hard to find new ways to say the same old things about your protagonist.
Read Full Review >>
See All Reviews >>
SIMILAR BOOKS
Coming Soon

On Java Road
Lawrence Osborne
Rave
What did you think of Golden Prey?
© LitHub | Privacy