gods with a little g 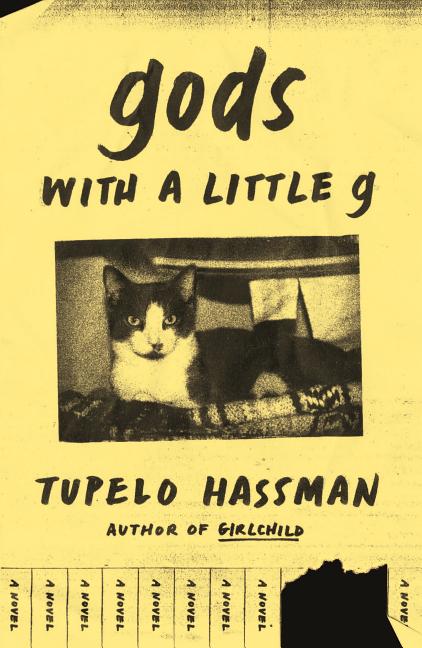 Motherless and aimless and looking for connection, Helen Dedleder is a girl with a gift she doesn't want to use and a pack of friends who are all just helping each other get by. For Helen and her gang of misfits, the tire yard, sex, and beer help pass the days until they turn eighteen and leave town. Watching over them is Aunt Bev, an outcast like the kids, who runs the barely tolerated Psychic Encounter Shoppe and tries to keep Helen connected to her own psychic talents.

What The Reviewers Say
Rave Michael Schaub,
NPR
Teenagers exist in a world of heightened emotions, and it can be tricky for writers to evoke that state of mind without seeming either distant or patronizing. This isn't a problem for Hassman — as in her debut novel, girlchild, she captures the anxieties and affections of young people in a perfectly realistic way, without a note of condescension ... And while Hassman proves masterful at recounting Helen and her friends' most painful moments, she also brings a disarming sense of humor to the novel ... Hassman is a vastly talented writer, and she brings to the novel a fascinating structure — gods with a little g is told in a series of short vignettes; the result is a staccato kind of narrative that brilliantly evokes the feeling of being a teenager, constantly addled, at loose ends, desperate to make a connection. And for all its dark moments, it's a novel that's as heartwarming as it is beautifully written.
Read Full Review >>
Rave Bethanne Patrick,
The Washington Post
...light shines through in almost every line ... This is well-charted territory, but it sings due to Hassman’s joy of text, unusual thinking and clever turns of phrase that allow even half-page 'chapters' to vibrate with truth ... as Helen discovers her own free will, her adolescent journey offers hope to readers of any age. The book’s final section races along with so much action that, like me, those readers may wish for a sequel, becoming evangelists for a writer with heart.
Read Full Review >>
Mixed Ayana Mathis,
The New York Times Book Review
Hassman offers us a vision of regular small-town folks enacting the worst aspects of themselves and their religion; a vision all the more salient in the current climate where abolishing people and ideas we don’t like has become the new American dream ... Helen’s mother died of a cancer likely linked to the oil refinery. Though her death doesn’t exert as much pressure on the story as it could, Hassman writes beautifully of Helen’s memories and grief ... engaging reading ... There are a great many happenings in this novel, but they don’t quite build to an arc of Helen’s becoming ... Hassman’s compassion for her characters can come across as wishful thinking ... It’s not that I wish Helen were a more tragic character—that indomitable, often hilarious voice of hers keeps us turning pages. But the novel needed a reckoning.
Read Full Review >>
See All Reviews >>
SIMILAR BOOKS
Fiction

Aesthetica
Allie Rowbottom
Positive
What did you think of gods with a little g?
© LitHub | Privacy