Gods and Robots: Myths, Machines, and Ancient Dreams of Technology 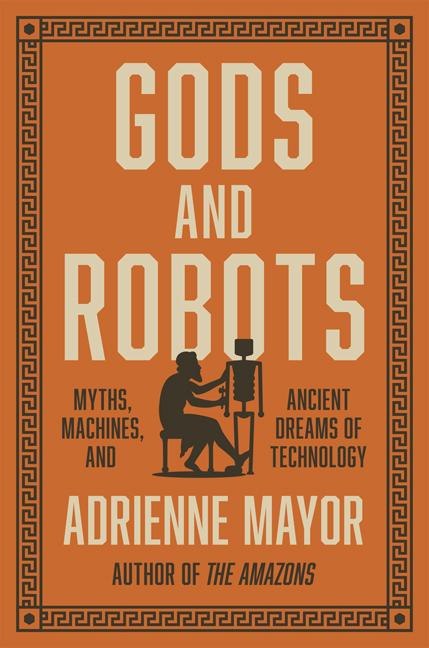 The untold story of how the ancients imagined robots and other forms of artificial life―and even invented real automated machines.

What The Reviewers Say
Positive Matthew Hutson,
The Washington Post
In Gods and Robots, Stanford science historian Adrienne Mayor describes how, more than 2,500 years before the modern computer, people told tales of autonomous machines that could labor, entertain, kill and seduce ... In Gods and Robots, Mayor carefully examines secondary and source material — writings and artwork — to discern the ancients’ views on minds both supernatural and soulless. She takes an academic tone... but draws occasional parallels to modern sci-fi movies such as 'Blade Runner' and Ex Machina.'
Read Full Review >>
Mixed Peter Thonemann,
The Wall Street Journal
Absorbing ... Ms. Mayor, a research scholar at Stanford, is an accessible and engaging writer, and she has a truly wonderful topic to play with. But her book is not an unqualified success. A handful of Chinese and Indian folk tales and myths are rather halfheartedly shoehorned in; she seems not quite to have decided whether this is a book about the ancient Greeks or wider premodern thought. More seriously, many of the Greek myths she explores really have very little to do with artificial life ... Overall, Gods and Robots feels rather like a punchy magazine article that has been stretched out far beyond its natural length ... does a good line in anecdotes about mechanical snails; but for a serious examination of the ethical and philosophical problems of artificial life, you will need to look elsewhere.
Read Full Review >>
Mixed Sarah Olson,
Science
Detailed storytelling and careful analysis of popular myths ... Despite her extensive knowledge of ancient mythology, Mayor does little to demonstrate an understanding of modern AI, neural networks, and machine learning; the chatbots are among only a handful of examples of modern technology she explores. Instead, Mayor focuses on her own area of expertise: analyzing classical mythology. ... Because Mayor’s analyses are so superb, further exploration into the influence of such stories on makers of modern video games would likely have fascinated readers.
Read Full Review >>
See All Reviews >>
What did you think of Gods and Robots: Myths, Machines, and Ancient Dreams of Technology?
© LitHub | Privacy