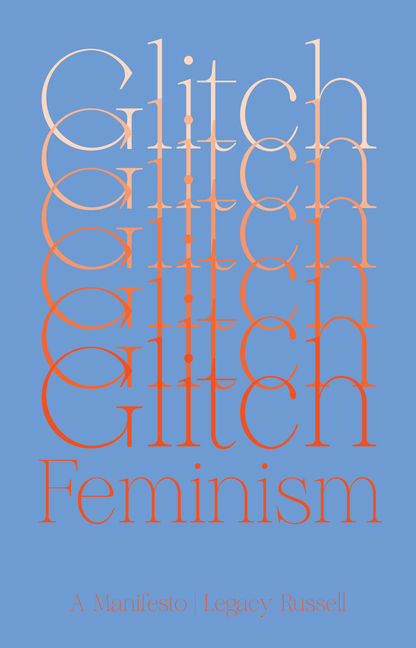 A museum curator and writer extends the cyberfeminism of the 1980s and 1990s by centering queer artists and thinkers of color via her notion of "glitch," re-conceptualizing the term from one connoting error to one intimating liberation from the demands of hegemonic norms.

What The Reviewers Say
Rave Jesse Damiani,
Forbes
Glitch Feminism is a rallying cry, a recapturing of cyberfeminism oriented to include and spotlight the many queer and non-white voices who in their practice live out the awesome potential of an enmeshed digital feminism: the glitch. In a full embrace of the potential of the manifesto form, Russell weaves together the work of these artists with poetic language that dances from play to scholarship, music to contemplation, pain to jubilance. Glitch Feminism is a groundbreaking text for its underlying assertion, yes, but the deftness with which Russell wields language is artwork in itself. Like the vibrant contrast of the book’s cover, Glitch Feminism is a bright declaration, an ecstatic embrace of the new futures that lurk just behind hegemonic defaults.
Read Full Review >>
Positive Rahel Aima,
Bookforum
Legacy Russell’s Glitch Feminism takes Walt Whitman’s 'I am large, I contain multitudes,' as a kind of fugal subject, expanding glitch feminism in scope with each repetition ... A refusal to be pinned down extends to the form of the book itself, which variously presents itself as a work of media theory, memoir, and manifesto, while primarily existing in the third register. This can result in some frustratingly unfulfilled promises ... glitch feminism takes technology primarily as an aestheticized metaphor. That’s not necessarily a failing, even if it does lead to some meandering ... Glitch Feminism, unfortunately, sometimes feels more like poeticized vaporware. That feeling lessens in the book’s last third, when Russell addresses the racialized construction of gender. She throws out a number of intriguing provocations ... I often wanted Russell to complicate and deepen these ideas, because some are strikingly original ... Still, there is some luminous, and even incandescent prose here, particularly when Russell talks about her early experiments with identity construction online and the gentrification of her hometown ... At its best, Glitch Feminism has that...comforting 'for us by us' feel.
Read Full Review >>
Positive Lucy Holt,
Cleveland Review of Books
Russell is deliberately leaning into her form, but instead of the long-form essay, she uses the tropes of the political manifesto to bring to light narratives of marginalised digital identities ... an internet text, bringing together references and anecdotes from visual art, cultural theory, and popular culture, creating a commonplace of resistance ... At times, it feels as if the idea of the glitch is nothing more than a catch-all for adjacent ideas about digital identity and resistance ... Russell’s manifesto feels most engaging when it is dealing with the digital ephemera of the sort of feminism it describes. Passages analysing the virtual social media influencer Lil Miquela, 'foundational refusal' within the work of contemporary artist E. Jane, and the 'embodied criticism' of radical art critics The White Pube, for instance, feel like righteous celebrations of the glitch.
Read Full Review >>
See All Reviews >>
What did you think of Glitch Feminism: A Manifesto?
© LitHub | Privacy