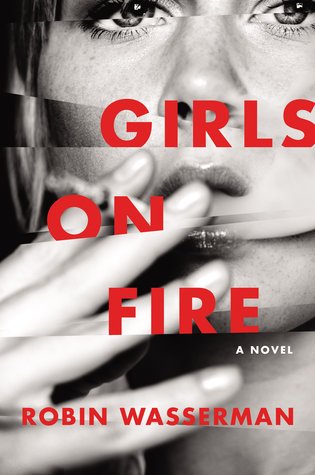 A portrait of the intoxication of female friendship, set against the unsettled backdrop of a town gripped by moral panic.

What The Reviewers Say
Rave Michael Schaub,
NPR
It wouldn't be fair to reveal too much of the plot of Girls on Fire. The first adult novel (and with its scenes of sex and violence, it's very, very adult) from young adult author Wasserman, much of its power depends on the suspense that she carefully constructs. That's not to say this is a run-of-the-mill thriller; it's a perfectly constructed literary novel, but one that dares its readers to put it down. And it's nearly impossible to put down. Much of that is because Wasserman's characters are so flawlessly realized — Hannah is an appealing everygirl, Lacey is compelling and terrifying, and Nikki is surprisingly complex, a sadistic manipulator who may or may not actually have a good heart ... Wasserman's novel turns the Satanic panic of the Reagan-Bush years on its head, and the result is a novel that's terrifying, upsetting and hypnotically beautiful. There's not a false step in it, and you never want it to end, although you know it has to. Girls on Fire is an inferno — it's brutally gorgeous, and you know it could explode anytime, but you can't turn away, even for a second.
Read Full Review >>
Rave Monique Alice,
The Barnes & Noble Review
Good girl meets bad girl, gets a taste of the bad-girl-life, sees the error of her ways, goes back to being good. That’s the morality trope quagmire that Girls on Fire could’ve fallen into, never to be heard from again. Thankfully, it doesn’t. The book is refreshing in its agility—the second you think you’ve got it pegged, it gives you the slip and heads in an entirely new direction. Instead of 'good girl' and 'bad girl,' what we get is closer to 'good girl who wants desperately to be bad but is not very good at it and is subsequently full of rage,' and 'bad girl who is maybe just a misunderstood girl…who may or may not be a sociopath.' For my money, this is a far more interesting cast of characters. We’re never quite sure who we can trust—a theme sure to be familiar to anyone who has gone through teen-hood and lived to tell the tale ... This book captures the cathartic mess of it all with artful prose that is chock full of fervent sensuality. Girls on Fire is a brilliant tale of love and betrayal between friends—complete with a can’t-look-away climax that will make your hair stand on end.
Read Full Review >>
Rave Briallen Hopper,
The Los Angeles Review of Books
Robin Wasserman’s Girls on Fire is as intense as adolescence and as dark as a dream. Like a half-repressed memory, it altered the atmosphere of my days as I read it, causing the air around me to shimmer with menace like heat waves on a highway.
Read Full Review >>
See All Reviews >>
SIMILAR BOOKS
Fiction

The Every
Dave Eggers
Mixed
What did you think of Girls on Fire?
© LitHub | Privacy