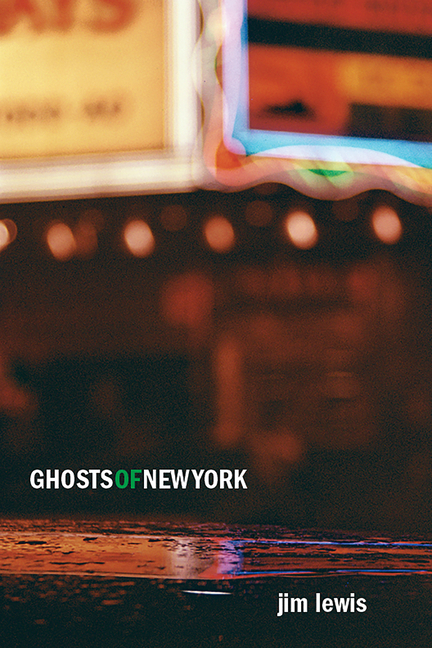 A novel in short stories that explores complex lives through indelible renderings of settings—a bar, a night market, a recording studio—that alternate between familiar and unsettling.

What The Reviewers Say
Rave David Goodwillie,
The New York Times
... extraordinary ... a haunting collection of loosely linked vignettes that quickly exploded the tropes I’d associated with writing about place ... As the novel gains momentum these lives and others begin subtly intertwining — David Mitchell-like — until the gears behind Lewis’s narrative reveal themselves, and a kind of ethos emerges from the urban cacophony: We are all connected in our disconnection, our solitude, our heartache, our longing. We are united by the city, which gives and takes indiscriminately, and in the end outlives us all...I don’t mean to sound a down note; there are hardly any to sound. Ghosts of New York is a wondrous novel, with prose that sparkles like certain sidewalks after rain ... Lewis’s sentences read like events, and his eye for the smallest detail is exquisite ... If the effect can seem disconcerting at first, it feels, by the end of the book, all but inevitable, as if the story could be told no other way ... That’s it, I thought. That’s exactly what it’s like to live in New York.
Read Full Review >>
Rave Karen Rigby,
Foreword Reviews
... wondrous ... encounters among strangers result in unexpected relationships, and a montage that celebrates a city of manifold graces ... Lewis’s observant, gradual stories are linked by recurrent characters and figurative ghosts, which arise in people’s impressions of a city that’s marked by history ... Against this shifting vastness, surprising, intimate situations unfold ... Mixed in length, from a sketch comprised of a list of dead New Yorkers, to an extended, first-person departure set around a man who reminisces about love and loss during his academic years, these stories relish city seasons and backgrounds. They’re unabashed in their extended descriptions of passersby, who often wear striking clothing and make photo-worthy gestures, such that peripheral details accrue into their own spectacle ... The stories omit realistic grit, but nonetheless delve deeper than a romantic paean would: they burrow into their characters’ psyches with delicate, idiosyncratic deliberateness—wearying when it leads to too much introspection, and startling when it hits the right emotional notes ... a subtle, dexterous novel in short stories.
Read Full Review >>
Positive Emily Park,
Booklist
... poignant vignettes ... Lewis is a master at painting developed characters captured in various moments in time. There is little dialogue in these series of vulnerable snapshots, but the lyrical narration is continuously engaging, especially as the episodic stories begin to interlace.
Read Full Review >>
See All Reviews >>
SIMILAR BOOKS
Fiction

A Man Named Doll
Jonathan Ames
Positive
What did you think of Ghosts of New York?
© LitHub | Privacy