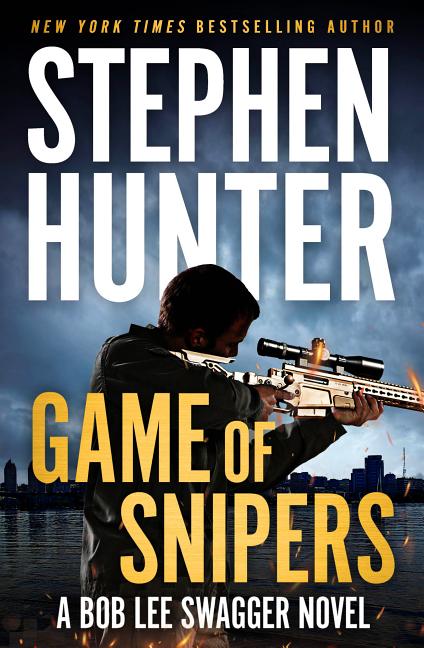 When Bob Lee Swagger is approached by a woman who lost a son to war and has spent the years since risking all that she has to find the sniper who pulled the trigger, he knows right away he'll do everything in his power to help her. But what begins as a favor becomes an obsession, and soon Swagger is back in the action, teaming up with the Mossad, the FBI, and local American law enforcement as he tracks a sniper who is his own equal...and attempts to decipher that assassin's ultimate target before it's too late.

What The Reviewers Say
Rave Joe Hartlaub,
Bookreporter
Who would have thought that Stephen Hunter would write one of his best novels at this point in his career, let alone well into the second decade of the 21st century? The newly published Game of Snipers is just that ... The book begins perfectly, ends wonderfully and is top-notch at all points in between. The first chapter consists of an enigmatic vignette that will haunt each and every reader up until the narrative catches up with it about midway through ... a thrilling mystery, full of false leads, cat-and-mouse chases, forensics, and deep background into the world of snipers, firearms and the rough men who stand ready in the night to do violence upon those who would harm us ... Game of Snipers is superb, but I’ve already told you that several times. You don’t have to have read a single volume of the series to thoroughly enjoy it and the laconic, effective Swagger, but you will want to do so after reading just the first few pages. You will, in fact, want to read every word that Hunter has ever written. Don’t wait.
Read Full Review >>
Rave The Real Book Spy
...another rip-roaring thriller from New York Times bestseller Stephen Hunter...who serves up another thrilling adventure featuring the world’s more feared sniper ... While all of Hunter’s books have been strong, this one’s on another level. Compared to G-Man, Game of Snipers has double the action, twice the suspense, and a faster plot than anything he’s written in the last decade ... The story, which starts fast and accelerates harder with each page, is engaging and filled with twists. Flashback scenes show the true evil of the sniper Swaggers takes on, but it’s the promise of a bigger, more high-stakes reveal that makes this one impossible to put down.
Read Full Review >>
Positive Anjili Babbar,
The Washington Independent Review of Books
Readers who have little interest in the history and workmanship of guns and even less in the transformative effects of shooting them might find themselves wary of the Swagger series and author Stephen Hunter’s well-known, multi-paragraph homages to gunmanship ... However...Hunter’s meticulous research and attention to detail in gun history and theory are extremely impactful when applied to characterization ... Like Swagger himself, though, Hunter does not take himself too seriously. The suspenseful narrative is sprinkled with wry humor, all the more effective due to its sparseness. Like in G-Man, it includes a secondary mystery — but, in this case, the reveal is genuinely smirk-worthy ... Among the most potent aspects of the novel is that the aging Swagger is an imperfect force, often stunted by impatience, lapses in research and education, and the consequences of hip replacements. This leaves room for Mrs. McDowell — with persistence, watchfulness, critical thinking, and empathy — to assume a place as the novel’s quiet hero ... not only an enjoyable read, but also a fitting and respectful tribute.
Read Full Review >>
See All Reviews >>
SIMILAR BOOKS
Fiction

The Devil Takes You Home
Gabino Iglesias
Positive
What did you think of Game of Snipers: A Bob Lee Swagger Novel?
© LitHub | Privacy