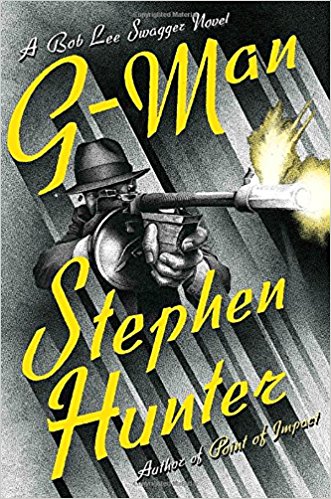 What The Reviewers Say
Rave John Wilwol,
Newsday
... this book is an ode to firearms and the fine art of gunsmithing that should’ve been printed in black powder and Hoppe’s No. 9 instead of ink. It’s also a great story ... G-Man alternates between the past and the present to unravel that knot. Along the way, we get vivid renderings of Dillinger’s notorious band of outlaws ... But this writer’s detailed descriptions of guns and their constituent parts, as well as his often sensual depictions of shooting, might be this novel’s most defining attribute ... With G-Man, a ballistic celebration of that year, this author has hit a bull’s-eye.
Read Full Review >>
Rave Bill Ott,
Booklist
Jumping seamlessly between past and present, Hunter re-creates the fascinating Depression-era story of how bank robbers became populist heroes, offering in the process a truly compelling character in Charles, a man burdened not only by his inflexible sense of honor but also by a secret residing deep in his soul ... Lots going on here, but Hunter fits the parts as snugly as Bob Lee reassembling a rifle. Yes, we know Hunter writes gun violence as realistically and meticulously as anyone in the business, but what we forget is that he builds character with equal precision. This is an outstanding thriller on every level.
Read Full Review >>
Mixed Gerald Bartell,
The Washington Post
Hunter renders these gun battles with great skill. The glimpses into Charles’s lightning fast mind are sharp, and the rendering of the gunman’s whiplash moves are impressive. Hunter’s descriptions of the shootouts evoke the war correspondence of Stephen Crane and Ernest Hemingway ... unfortunately, Hunter stalls the momentum of his story with an inordinate amount of detail about guns. We see how they look. We learn of their histories. We study how they’re maintained, and, again and again, we’re told how they work. This level of detail will, admittedly, fascinate some readers, just as surely as it will turn away others. Equally off-putting to some readers will be the meager roles that Hunter gives women to play in his story ... Hunter’s double-barreled finish, though, should satisfy everyone.
Read Full Review >>
See All Reviews >>
SIMILAR BOOKS
Fiction

The Preserve
Ariel S Winter
Positive
What did you think of G-Man?
© LitHub | Privacy