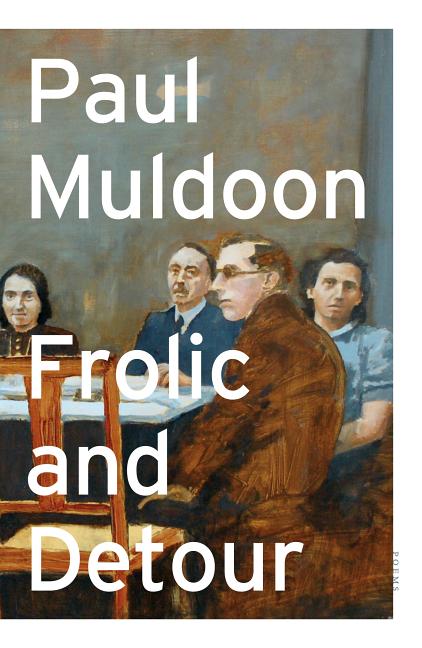 Paul Muldoon brings his characteristic humor and humanity to the chickadee, the house wren, the deaths of Leonard Cohen and C. K. Williams, the Irish Rising, the Great War, and how 'a streak of ragwort / may yet shine / as an off-the-record / remark becomes the party line.' Frolic and Detour reminds us that the sidelong glance is the sweetest, and the tangential approach the most telling.

What The Reviewers Say
Rave Stuart Kelly,
The Scotsman (UK)
In our age of facile Instagram poets and one-note-joke performance poetry, Muldoon shows how craft and craftiness can cleave together ... Like many of his previous collections, Frolic And Detour has longer poems interspersed with shorter works. The longer form seems to suit Muldoon best, as a kind of challenge to the idea that the ideal poem is a haiku. It would be wrong to highlight the 'stand out' poems as almost every page shows a dazzle and glamour that few other contemporary poets might reach ... he requires you to re-read, not read ... This is poetry at its most wide-ranging and curious about the world, but cleverly fettered in formal strictures and structures. If you buy one book of poetry this year, make it this one. Although you might learn to appreciate the nuance of how contemporary poetry can be askance and awry, you shall come away with a kind of moral polish. It is not 'difficult'; that curse word of modern poetry. Take for example just this: 'Now we’re known less for snipers’ nests / than nests of singing birds'.
Read Full Review >>
Rave Paul Scott Stanfield,
Ploughshares
Like Bob Dylan, [Muldoon] makes a point of never being exactly where we expect him to be while somehow remaining distinctively himself. Muldoon’s extraordinary facility with both familiar and rare closed forms and his acrobatically inventive rhyming and off-rhyming have diminished not a whit in his sixties ... Poets as formally dexterous as Muldoon run the risk of being accused of emotional dryness or chilly indifference to the urgent sociopolitical concerns of the hour, and both charges have at times been floated in his direction. Neither applies ... Nothing is more Muldoonian than ending a book with a long poem—every collection since Why Brownlee Left in 1983 has ended so—and it is hard to imagine a more Muldoonian long poem than 'Frolic and Detour.' ... The volume is Muldoonian, too, in including several elegies: C. K. Williams, Richard Wilbur, Leonard Cohen, John Ashbery. The examples of Cohen and Ashbery seem peculiarly apposite as Muldoon wheels into what may be his 'late' phase. Like Ashbery in his final collections, or Cohen in his final albums, Muldoon has nothing left to prove, and can take delight simply in doing what he inimitably does. And his delight is ours.
Read Full Review >>
Rave Raúl Niño,
Booklist
Muldoon reinvigorates the craft in his new, punching collection. Traversing both time and topography, these poems frisk through contrasting sensations ... With a tour guide’s knowledge and engagement, Muldoon circumnavigates historical follies and whims ... This is a strong, agile collection from one of the world’s finest poets at his best.
Read Full Review >>
See All Reviews >>
SIMILAR BOOKS
Fiction

Fantasia for the Man in Blue
Tommye Blount
Rave
What did you think of Frolic and Detour: Poems?
© LitHub | Privacy