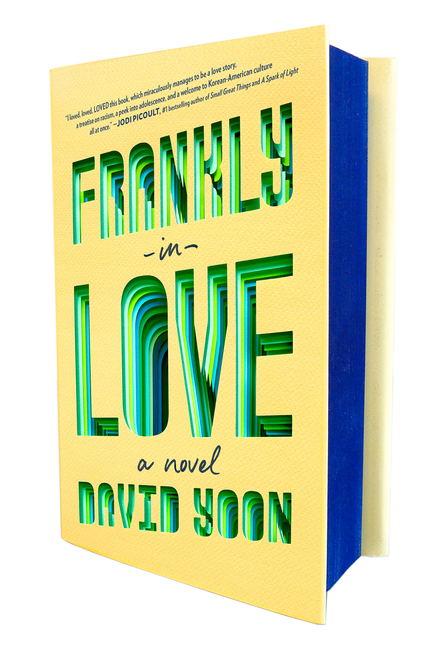 For 17-year-old Frank Li, disappointing his stubborn, high-strung Korean immigrant parents is to be avoided at all costs. When Frank falls for a white girl named Brit, he knows that he has to keep their relationship hidden from his family. To cover his tracks, he becomes entangled in a fake relationship with Joy Song, a close family friend. But when disaster after disaster strikes, Frank learns the hard way that some things are more important than high school romance

What The Reviewers Say
Rave Olivia Rhee,
BookPage
Through funny, relatable prose and some truly heartbreaking moments, Frankly in Love wrestles with important questions of race and identity. Yoon encapsulates the teenage experience, not only for young Korean Americans but for all teens. He also tackles stereotypes, and though the novel does occasionally play into them, many are eventually broken down in surprisingly clever ways. Having grown up Korean in America, I had points while reading this novel when I nearly wept from the feeling of having been seen for the first time in YA literature. Frankly in Love is an absolute must-read for young people grappling with questions of identity.
Read Full Review >>
Rave Kirkus
...[a] spectacular debut ... Through rich and complex characterization that rings completely true, the story highlights divisions within the Korean immigrant community and between communities of color in the U.S., cultural rifts separating immigrant parents and American-born teens, and the impact on high school peers of society’s entrenched biases. Yoon’s light hand with dialogue and deft use of illustrative anecdotes produce a story that illuminates weighty issues by putting a compassionate human face on struggles both universal and particular to certain identities ... Yoon’s unpacking of the complexity of the racial dynamics at play is impressive—and notably, the novel succeeds equally well as pure romance. A deeply moving account of love in its many forms.
Read Full Review >>
Positive Publishers Weekly
Yoon’s debut examines issues of identity through a significant but often-overlooked subset of the Korean diaspora in California: working-class immigrants and their first-generation children ... Yoon never settles for stereotypes, instead giving his well-defined characters a diversity of experience, identity, sexuality, and ambition. Told in youthful-sounding prose, Frank’s journey reaches beyond Korean-American identity and touches on the common experiences of many children of immigrants, including negotiating language barriers, tradition, and other aspects of what it means to be a 'hyphenated' American.
Read Full Review >>
See All Reviews >>
SIMILAR BOOKS
Fiction

Milk Fed
Melissa Broder
Rave
What did you think of Frankly in Love?
© LitHub | Privacy