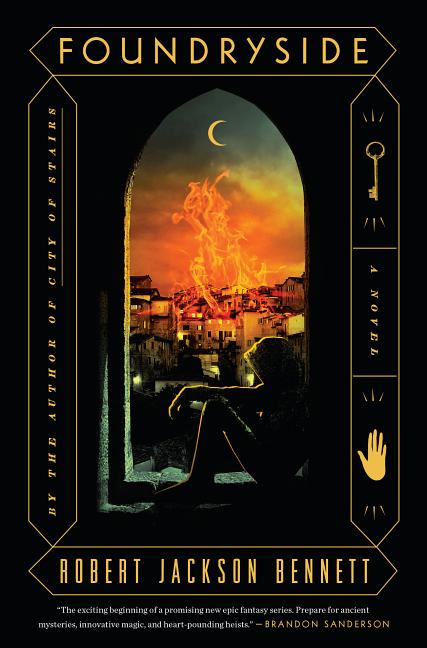 A thief in a city controlled by industrialized magic joins forces with a rare honest police officer to stop an ancient evil ritual that endangers thousands of lives.

What The Reviewers Say
Rave Amal El-Mohtar,
The New York Times Book Review
Robert Jackson Bennett, author of the Divine Cities series, launches...an absolutely riveting secondary world fantasy ... To say 'I couldn’t put it down' is a cliché ... So when I say I couldn’t put Foundryside down, what I mean is this: I felt fully, utterly engaged by the ideas, actually in love with the core characters for their differences and the immensely generative friction between them, and in awe of Bennett’s craft. I went to bed late reading it and woke up early to finish it ... a magnificent, mind-blowing start to a series I’m hungry for.
Read Full Review >>
Rave Martin Cahill,
Tor.com
If there’s one thing I’ve learned reading Robert Jackson Bennett, it’s that when you think you know what he’s going to do at any given moment, you’re most likely going to be wrong ... Bennett is firing on all cylinders, taking what at first seems to be something a little standard, a little rote, and infusing exhilarating new life into it through expert writing, complicated and distinct characters, and an intriguing, deadly, wonderful new city ... While on the surface this seems like a story we’ve seen before, Foundryside is immediately infused with Bennett’s eye for unique systems of magic, what makes people complicated beyond just being good or bad, and a city that has been pushed so far past being a capitalist dystopia, it’s a wonder it’s still functional ... Foundryside lives and dies on its characters, and Bennett’s novel more than thrives with the people he focuses on ... Foundryside is an excellent first novel in what promises to be another home-run series for Bennett.
Read Full Review >>
Positive Kirkus
Bennett (City of Miracles, 2017, etc.) inaugurates another series of imaginative, thoroughly idiosyncratic fantasy novels ... Mona Lisa meets The Matrix in Bennett’s introduction to the carefully constructed world of Tevanne ... If you accept the notion that the laws of gravity are just suggestions, this makes for a grand entertainment.
Read Full Review >>
See All Reviews >>
SIMILAR BOOKS
Fantasy