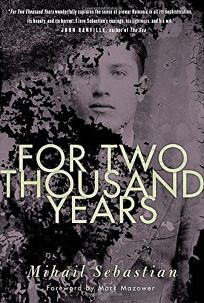 First published in Romania in 1934, a new translation of a Romanian Jewish man's fictional diary as he grows isolated in the interwar years, caught between anti-Semitism and Zionism.
Rave
Based on 4 reviews

What The Reviewers Say
Rave Ken Kalfus,
The New York Times Book Review
In notes that are elegiac and lyrical, the young man contemplates millenniums of Jewish history. He wonders what it means to be a 20th-century Jew, especially a Jew who’s also a patriotic Romanian. How does one bridge ‘the divide between the Danube and the ghetto’? … One of the young man’s two non-Jewish mentors believes in an intrinsic national character dependent on the Romanian heartland. The other is urban and European. They are bitterly opposed, in terms that will be uncomfortably familiar to contemporary readers … What’s chilling about For Two Thousand Years, in this sensitive translation by Philip Ó Ceallaigh, is how its oppressive atmosphere foreshadows the rise of Romanian authoritarianism and the destruction of Romanian Jewry, even though it was published before the fascists came to power.
Read Full Review >>
Rave Julia Elsky,
The Los Angeles Review of Book
In Mihail Sebastian’s subtle novel For Two Thousand Years, first published in Romania in 1934, Sebastian chronicles the rise of Codreanu’s movement and presents us with a nuanced view of the individual caught in a time of radicalization and rising xenophobia. Philip Ó Ceallaigh’s fluid translation of the novel comes to us at the right moment … The diarist, who is never named, draws us into his struggle as a Jewish intellectual during the rise of fascism. The absence of a name has the effect of both associating him with Sebastian as well as placing him in the role of an everyman Jewish Romanian … Sebastian’s nuanced novel does not simply decry Romanian history as another, inevitable episode in a 2,000-year-old cycle of anti-Semitic violence. The strength and timeliness of this novel lie in the diarist’s grappling with how to respond as an individual to what we now call hate speech and to violence on the university campus.
Read Full Review >>
Positive Sam Sacks,
The Wall Street Journal
[Sebastian is] known for the diaries he kept between 1935 and 1944, in which, like Victor Klemperer in Germany, he chronicled his country’s headlong descent into fascism. For Two Thousand Years, a fictionalized diary based on Sebastian’s experiences in the decade prior, is a pendant to that vital document. It reveals a young, idealistic man grasping for freedom from the external oppression of anti-Semitism but also, paradoxically, from the beholdens of his Jewish heritage. The diary entries (in a vigorous translation by Philip Ó Ceallaigh ) follow the unnamed narrator from his time at university, when right-wing thugs beat up Jewish students when they attended classes, to his maturation as an emerging architect. The slender plot serves mostly as a vessel for passionate arguments. The narrator records his interactions with budding fascists, nihilists, Marxists and Zionists. But his fiercest debates are with himself.
Read Full Review >>
See All Reviews >>
SIMILAR BOOKS
Fiction

The Forger's Daughter
Bradford Morrow
Rave
What did you think of For Two Thousand Years?
© LitHub | Privacy