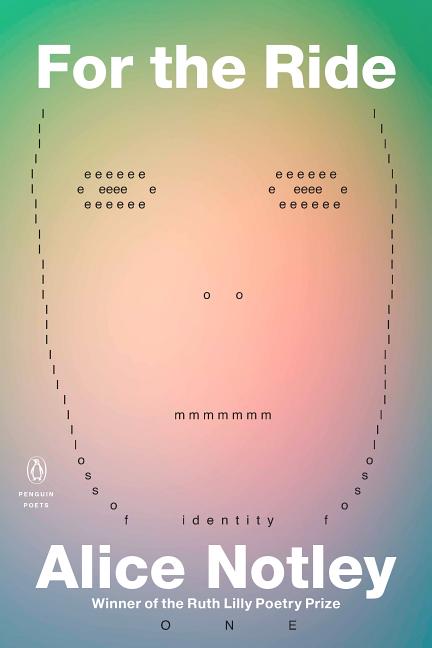 In this book-length poem, the protagonist, "One," is suddenly within the glyph, whose walls project scenes One can enter, and One does so. Other beings begin to materialize, and it seems like they (and One) are all survivors of a global disaster.

What The Reviewers Say
Positive Yasmine Shamma,
The Times Literary Supplement (UK)
Picking up a book about an apocalypse during what feels like an apocalypse has its own difficulties. Alice Notley’s For the Ride – her forty-fifth book in almost fifty years – is both challenging and rewarding, punctuating a remarkably long and quietly rebellious poetic career with an ellipsis of sorts, as it gestures to what has come before it, while also erasing or replacing it ... it implies a writing life devoted to one long song, playing it in a different key each year, repositioning its lyric subjects, and offering all the time a new slant through which her evolving oeuvre may be understood or, as in the case of For the Ride, understood as not singularly understandable ... 'I’m not one thing', Notley said in an interview in 2017, and it’s not easy to find one thing that would be consistently true of her work at large. What one could say is that it leaves the reader not with a sense of discovery but of setting out on a search which each work refuses to end...
Read Full Review >>
Rave Jon Curley,
Hyperallergic
Notley frustrates any linear progress, any sense of arrival or completion, or serene feeling of accomplishment by dismantling the epic as she constructs it. The work gestures not so much to postmodern instability as to a supreme skepticism toward language and the sociopolitical landscape that shapes it and to which it responds. A chronicle of confusion and occasionally despair (yet never resignation), this volume brims with inventive intelligence, always in motion but never venturing to a set destination ... The gaps in information create hives of thriving conundrums that Notley obliges the reader to navigate but not alone ... What the book charts the difficult, yet crucial process of finding a vehicle for expression, and the means to assess the value of words and their historical contexts. An oblique, but honest example of a particularly pressurized form of inquiry, it is also a call to consider the possibilities of word and world inquiry ... wants us to reach for origins, ur-texts, ur-thoughts, ourselves. Alice Notley calls for an epic consideration of the ethics of language in the world ... While we desperately seek words to live by, the companionate uncertainty of this tour de force volume is vital company indeed.
Read Full Review >>
Mixed Elisa Gabbert,
The New York Times Book Review
The book’s a kind of game, a text-based adventure ... Though the situation’s murky, the syntax estranging, the form itself is familiar, for most of the book: left-justified lines, grouped into stanzas. But between these are several visual poems, much weirder to the eye ... The satisfaction of “solving” these puzzles, or finding possible solutions, offers relief from the mystery of the rest, which might be unsolvable — much like the real problems (climate disaster, ecological collapse) the book imagines us living, or not living, after ... If the book sounds maddening, it often is. It seems frustrated with itself ... this book also annoys me deeply ... There’s a certain corniness to the whole sci-fi setup, One’s journey in the glyph ... There’s too much pre-existing scenery and special effects in our minds to imagine this world up from scratch.
Read Full Review >>
See All Reviews >>
SIMILAR BOOKS
Fiction

Fantasia for the Man in Blue
Tommye Blount
Rave
What did you think of For the Ride?
© LitHub | Privacy