For the Killing of Kings 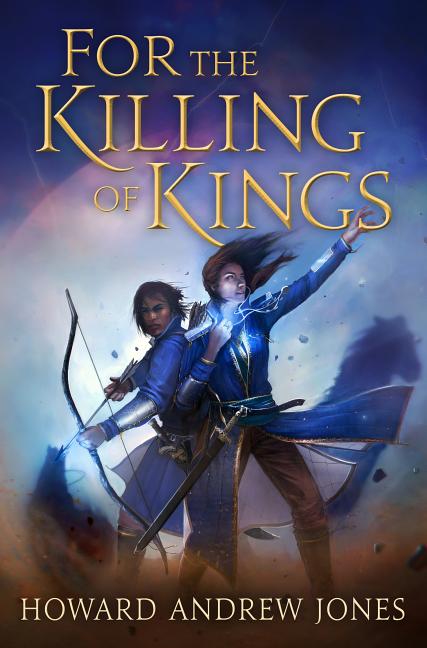 Their peace was a fragile thing, but it had endured for seven years, mostly because the people of Darassus and the king of the Naor hordes believed his doom was foretold upon the edge of the great sword hung in the hall of champions in the first book of this new adventure-filled trilogy.

What The Reviewers Say
Rave Chris Pickens,
BookPage
Do you ever find yourself wondering what the next blockbuster epic fantasy series will be? Howard Andrew Jones’ For the Killing of Kings might be it ... This is a traditional epic fantasy with all the stops pulled out—an interesting magic system, squabbling warrior factions—but its vivid, varied characters set it apart. And Jones puts additional weight into the history just prior to the story’s setting, adding mystery and depth to this perfect introduction to a new fantasy universe.
Read Full Review >>
Positive Paul Weimer,
Tor.com
The novel’s real heart and center is the action beats and strong sense of pacing. The novel sometimes wants to hurry a bit too much to get to the next good bit, but it’s in service of getting Elenai and Rylin into the crucible of conflict, fire-forging them as they face various obstacles and setbacks. I have found a tendency in Amber-like novels to have the elder characters be over-powered and capable of everything, with the less experienced or younger characters pushed to the sidelines as observers or shadows of the major players. Happily, For the Killing of Kings manages to avoid this pitfall ... The novel doesn’t end on a good off-ramp—it’s clearly meant to be the first of a series, unapologetically, with its story only begun. But the entertainment value, and the hints of even greater revelations about the past of the iconic characters, and the world, make me very interested in how Jones continues the story.
Read Full Review >>
Rave Publishers Weekly
Multiple protagonists thrive amid immersive details of the realm and the creatures found therein. Jones’s exciting epic will have readers laughing, crying, and cheering for the men and women of the Altenerai.
Read Full Review >>
See All Reviews >>
SIMILAR BOOKS
Fantasy

Ordinary Monsters
J M Miro
Positive
What did you think of For the Killing of Kings?
© LitHub | Privacy