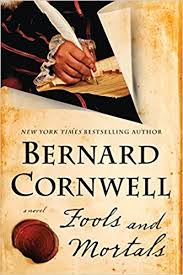 What The Reviewers Say
Rave Steve Donoghue,
The Christian Science Monitor
Given his penchant for historical fiction and his freakish productivity – this is his 54th novel – it was only a matter of time until bestselling writer Bernard Cornwell got around to Shakespeare, and in his new book Fools and Mortals, he does just that…but it's not playwright William but his younger brother Richard who's the star of the story ... He thinks of Richard, with some justification, as a strutting, whining fool, but even allowing for sibling rivalry, William isn't exactly overflowing with the milk of human kindness himself...this is a Shakespeare who's often cruel but never kind ... Cornwell has had a vast amount of experience at working his exposition smoothly into his narrative, and all that experience pays off in Fools and Mortals: as in all the best historical fiction, readers will come away with a seminar's-worth of historical knowledge without feeling like they did any heavy lifting.
Read Full Review >>
Positive Sam Sacks,
The Wall Street Journal
With Fools and Mortals Bernard Cornwell joins the speculative fun, presenting a portrait of Shakespeare that seems impressively original ... This book is a change of pace for Mr. Cornwell, who is best known for his historical novels... Fools and Mortals features a bit of swordplay — as Richard points out, any actor worth his salt needed to know how to handle a rapier — but readers should still expect less action here than in the author’s usual fare ... The plot is almost insouciantly slight ... Mr. Cornwell fattens up this story with a splendor of period detail, introducing a range of London characters from cutpurses and bear-baiters to noblemen, and distinguishing each through colorful speech and dress.
Read Full Review >>
Pan Terry Zobeck,
The Washington Independent Review of Books
Bernard Cornwell’s 55th book is something of a departure. True, it’s an historical novel, but it is not concerned with military adventure. Rather, it tells the highly speculative tale of William Shakespeare’s initial production of A Midsummer Night’s Dream as recounted by his younger brother, Richard ... The first half or more of the book is taken with setting the scene for the little action in the second half. We get plenty of background on Elizabethan theater and the politics of the time ... Cornwell brings his usual penchant for historical accuracy in setting his scene, but there isn’t much incident or excitement in the book to hold the reader’s attention. While all of the detail about the workings of Elizabethan theater is mildly interesting, it’s not enough for a nearly 400-page novel ... I suspect Cornwell’s fans, who seek thrilling historical action and adventure, will be disappointed with Fools and Mortals, while new readers drawn by the Shakespeare connection will be disappointed by the shallowness of the characterizations and plot.
Read Full Review >>
See All Reviews >>
SIMILAR BOOKS
Fiction

This Other Eden
Paul Harding
Rave
What did you think of Fools and Mortals?
© LitHub | Privacy